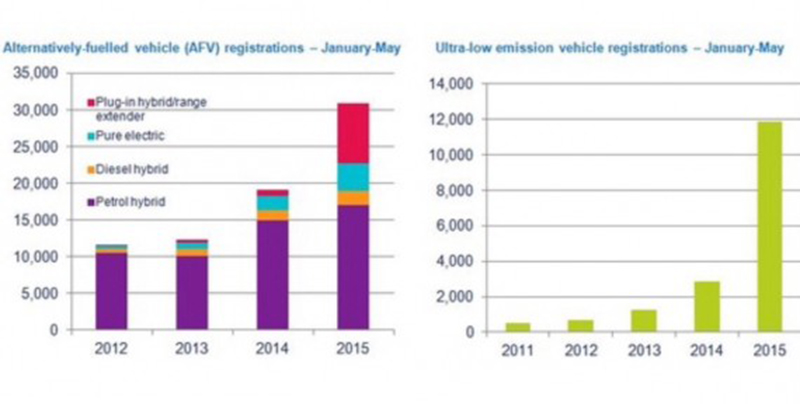 By Drive Electric15 June 2015No Comments

Electric vehicle (EV) registrations in the UK between January and May of 2015 are already roughly equal to total EV registrations in 2014, based on the most recent figures from the Society of Motor Manufacturers and Traders (SMMT).

Apparently, there have already been 11,842 ultra-low-emission vehicles (ULEVs) registered in the UK this year (as of the end of May). This compares to 2,838 units registered during January–May 2014 — which means that more than 4 times the number of ULEVs have been registered this year as compared to 2014.

Of these 11,842 ULEVs registered, impressively, 3,772 were all-electric vehicles — making for a 99% year-on-year improvement over the same period during 2014.

Considering that 2014 was also a record year for ULEV sales in the UK, the new 2015 numbers show that the exponential trend seen last year looks likely to continue this year as well.

This is down, according to SMMT representatives, to the fact that UK consumers are becoming more and more acquainted with the advantages of ULEVs (and the reality of their very existence in general); and, also, thanks to the increased offerings now on the market — 20 different ULEVs models now, as compared to only 6 back in 2011.

“The remarkable growth in demand for plug-in vehicles is expected to continue as the range of ultra-low emission vehicles on sale increases,” stated Mike Hawes, chief executive at the SMMT.