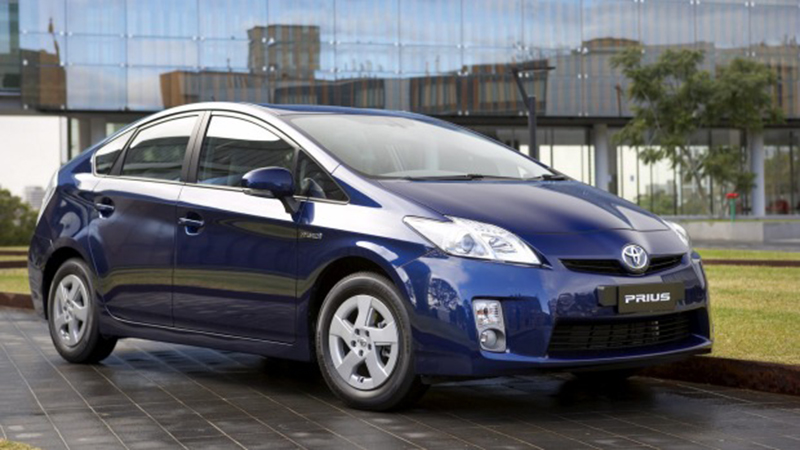 By Drive Electric21 April 2015No Comments

By Craig Trudell and Yuki Hagiwara.

When Scott Fisher bought his 2006 Prius, there weren’t many other choices that give him use of the carpool lanes on his drive to work in New York. That changed last year when the Long Island lawyer traded in his car for a Honda Accord Hybrid.

“It was starting to get a little bit dated,” Fisher, 45, said of the Prius.”When I bought it, it was futuristic. Back then, most cars didn’t have BlueTooth, a lot of them didn’t have rear-view cameras. Now, they all have it. The other manufacturers have caught up.”

As Toyota prepares for the new Prius later this year, both car and company are at turning points. First introduced in 1997, the hybrid is no longer the green-car darling of the Hollywood set. That sort of buzz now surrounds the electric vehicles produced by Elon Musk’s Tesla Motors.

Toyota’s success in creating a viable market for once- revolutionary gasoline-electric cars inspired a slate of challengers, including newer hybrids in Toyota’s own showrooms. The Prius also no longer boasts the most cutting-edge technology – that now belongs to the hydrogen-powered Mirai championed by President Akio Toyoda.

“Prius will become more mainstream,” Jack Hollis, group vice president of Toyota marketing at the company’s US sales unit, said in an interview. “The Mirai gives us a chance to say what the future is even further out.”

The new Prius will be the first tangible result of Toyota New Global Architecture, or TNGA, which Toyoda bills as a rethink of the company’s business model. Multiple vehicles will share common underpinnings and components – such as Denso Corp. air-conditioner units or Johnson Controls seat structures.

The goal is to cut costs 20 to 30 percent, savings Toyota will spend to change the perception its cars look boring. If the company builds the Prius prototype it showed US dealers in August, it’ll epitomiSe Toyoda’s push for more exciting rides, said Mike Jackson, chief executive officer of AutoNation Inc.

“Here you have one of the most technologically advanced cars, packaged in one of the most boring designs in the history of mankind,” said Jackson, who runs the largest US auto dealership group. “They’ve really tried to bring personality to the next-generation Prius,” he said. “It’s definitely not plain vanilla.”

Inside Toyota, there’s been much debate over whether the company ought to stray from the familiar looks of its pioneering, wedge-shaped hybrid model, said Jim Lentz, Toyota’s North American chief.

“I think for the most part, it will be intact,” Lentz said at the Detroit auto show. “When you see styling, you see interior, the changes we made in the next generation – it’s going to be strong.”

The current Prius will have gone almost seven years without major changes, the longest period between revamps. The old age is showing on the factory floor and sales charts. Toyota’s Tsutsumi plant in Japan used to produce one Prius every 57 seconds. After years of slipping demand, some workers wrap up shifts 30 minutes early. Others already transferred to busier plants.

After a four-year run as the top-selling car in Japan, the Prius slipped behind the smaller Aqua (Prius C in New Zealand) hybrid in 2013 and Honda’s Fit last year. Honda’s Accord sedan unseated the Prius in 2014 in California.

The new Prius will deliver a lower center of gravity and more rigid frame that improves the ride and handling, elements that Toyota promised will incorporate in its lineup thanks to TNGA.

Toyota will have to do more if it wants to maintain the Prius as the showcase for the company’s newest and best features. Innovations back in 2009, like rear-view cameras, touch controls and crash-avoidance braking are increasingly standard fare in new cars.

Prius will still hold a fuel-economy edge in the U.S. excluding EVs, with Toyota promising a 15 percent improvement across its hybrid lineup through its TNGA efforts.

While Toyota can count on repeat buyers – IHS Automotive says more than 60 percent of Prius owners bought another when they replaced their cars in 2012 and 2013 – competitors like Tesla are aiming to pry away these loyal customers.

“I used to like Prius a lot,” said Kurt Kelty, Tesla’s director of battery technology and former Prius owner, who takes pride in converting others like him to the Tesla. “Even so, I don’t want to drive cars other than Model S. This is a next- generation car, and I hear our customers say the same kinds of things.”