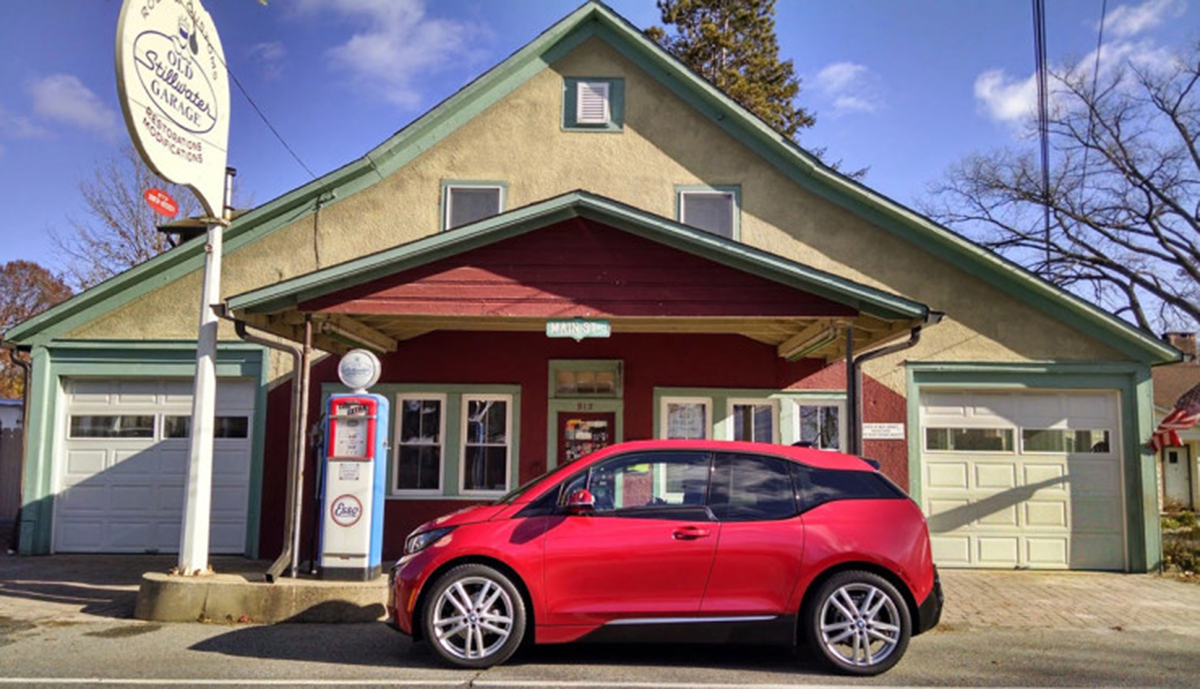 By Drive Electric8 November 2015No Comments

I know many readers here have spent countless sleepless nights pondering the the age-old question: How long does it take to refuel a BMW i3’s tiny gas tank?

Well maybe not, but I have had people argue that driving the i3 REx on an extended trip would be very inconvenient because they would have to stop to fill up the gas tank every 50-60 miles. I’ve done quite a few road trips with my i3 REx, and stopping once an hour for a couple of minutes to refill the tank never really bothered me much.

I wrote a post last year which detailed a 462 mile round trip I made to Vermont from my home in New Jersey and refuelling was one of the topics that many people commented on. On that trip, I had to stop for gas a total of seven times, as I only recharged the car once, which was at my destination. I drove 111 miles on battery, 351 miles on the range extender and used a total of 9.87 gallons of gas, averaging 35.5 mpg. 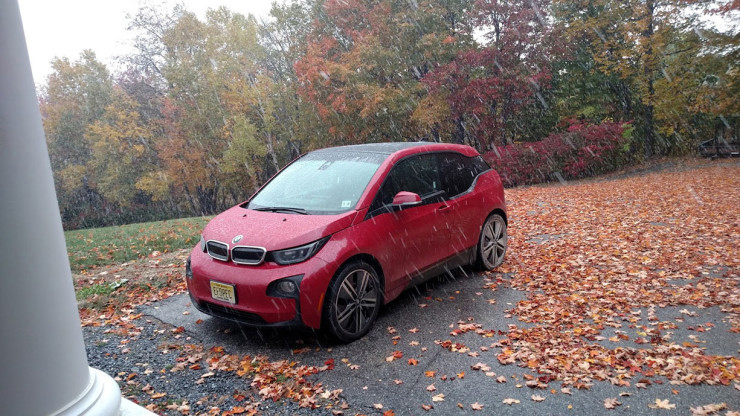 It was snowing in Vermont when we arrived.

In that post, I wrote that I found it funny how quickly the gas tank fills because it’s only 1.9 gallons. My wife started timing how long it took to stop for gas and we averaged a little over two minutes. I remember wishing we had recorded one of the gas breaks so we could demonstrate just how quick you can pull off the highway, fill up, get back into the car and back out onto the highway. I made a note that the next time we drove back up to Vermont, we would do just that.

So last week we made the Vermont trip again, and as planned we recorded one of the gas stops:

As you can see, I started the stopwatch before we exited the highway, and stopped it when we were back on the highway. I didn’t jump out of the car and rush like a NASCAR pit crew filling up. I took my time and even spent a couple extra seconds topping off so I’d get every drop that I could into that tiny tank and we still did it in under two minutes.

The point of the exercise was to demonstrate that it’s really not that inconvenient to make a quick gas break about once every every hour. I will qualify that statement with the fact that here in the Northeast there are gas stations everywhere. It seems that I’m never more than a couple miles from one, so when I’m doing these long drives I can plan the stops at convenient intervals when the tank is nearly empty. While that is the case for many large city and suburban areas throughout the country, there are plenty of rural areas where gas stations aren’t as prevalent, and the small gas tank would be a problem. The i3 REx most likely isn’t well suited for use in those areas. But hey, BMW calls it a “city car” after all. 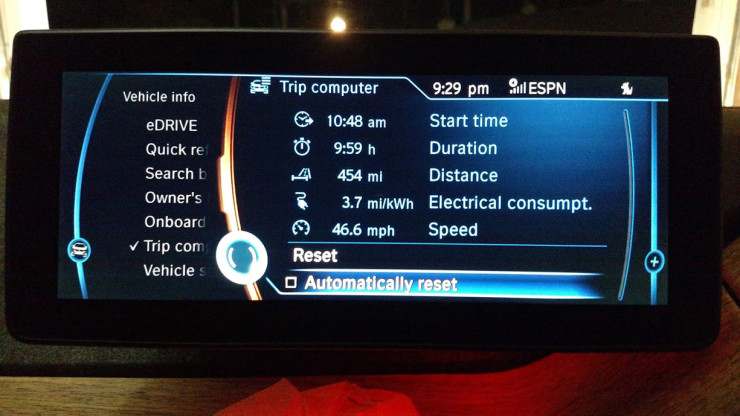 As I mentioned above, when I made the trip last year I only did 111 miles on battery and drove 351 on the REx. This year I was able to drive 270 miles on battery, and needed only 184 miles with the range extender maintaining the battery state of charge. This was possible because of the always improving charging infrastructure. I was able to stop twice (once each way) at Prestige BMW in Mahwah, NJ and use their new DC fast chargers. Also, on the way home I stopped for a couple hours at a friend’s house who just recently installed a 240v level 2 EVSE in his garage. These stops allowed me to more than double the all-electric miles for the trip, and I only needed 4.9 gallons of gas for the 184 miles I drove with the range extender running, as I averaged 37.5 mpg. 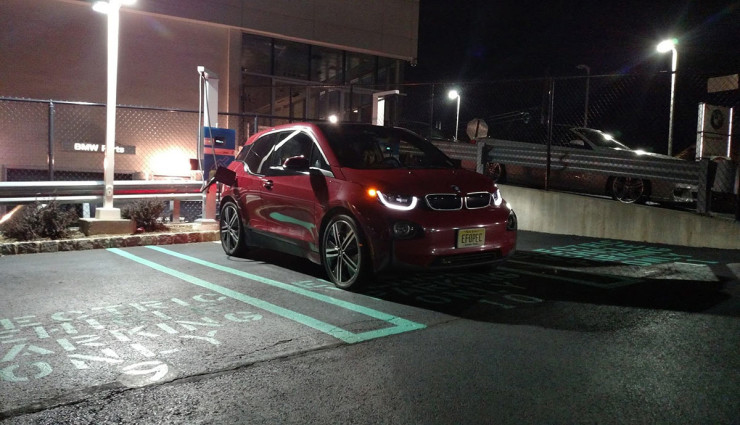 I used the recently installed DC Fast Charger at Prestige BMW on both legs of the trip.

I now have over 36,000 miles on my i3 after seventeen months of ownership, and only about 1,750 of those miles were on the REx. The range extender has been a great feature and I’m still very happy I got it. It does what it is supposed to; it gets you home without worrying about finding a charging station on the rare days that the electric range isn’t enough, and it enables the occasional long road trip. There are limitations though, and extreme hill climbing while the REx is running for prolonged periods at highway speeds, can result in reduced power.

Fortunately I’ve never had that happen to me but I don’t really have any big mountains which I need to climb. On my Vermont trips I set the Active Cruise Control to 70 mph and have never had an issue yet, even though there are some prolonged climbs at the end of the trip. I did get the “Reduced Power Possible” warning once though, as the state of charge hit a low point of 2% once. However it held there until I crested the climb and once I was on flat ground the SOC climbed back up to about 6%. I left the cruise at 70 mph because I actually wanted to see at what point it would go into reduced power mode, but it never happened. 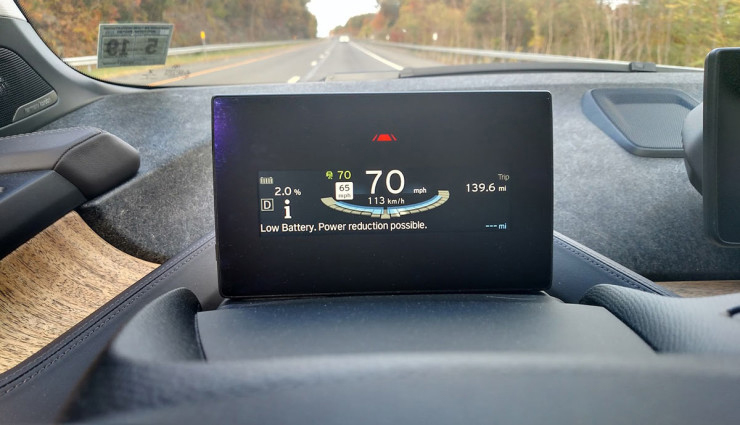 On one climb, I was able to get the SOC down to 2% and at that point the car warns you that reduced power may occur if you continue without altering your driving. Basically it’s saying “Slow Down!”

Still, in a perfect world I’d prefer a 150 mile, all-electric-range i3 combined with adequate DC fast charge infrastructure. Personally, I really don’t need 250 or 300 miles of range, and I’d rather not pay for it. However, even though the infrastructure is improving, I think 200 miles of range is probably more acceptable until DC fast chargers are ubiquitous. It appears with Nissan andChevy poised to bring 200 mile EVs to market in the coming year, the “affordable” electric vehicle market is going to get very interesting. BMW’s CEO recently announced that the 2017 i3 will have a longer all electric range also, but didn’t comment on exactly how much more. That’s good news because as much as I like how the REx works, and how quickly I can refill the gas tank, I’d still much prefer going on battery alone.