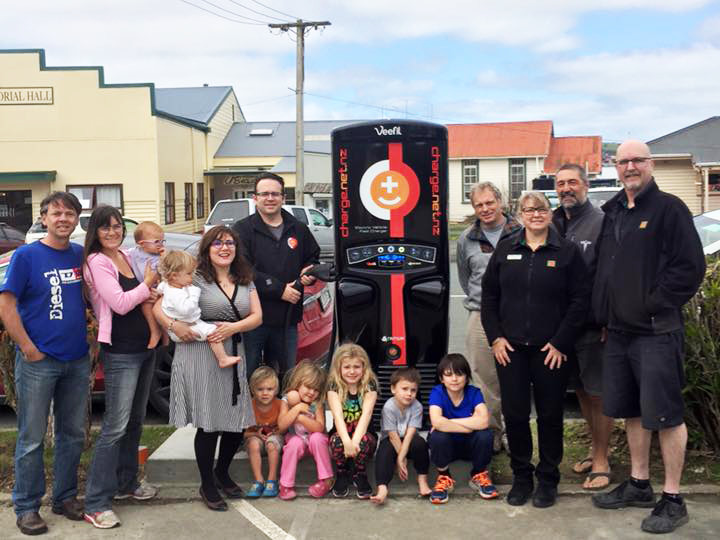 Kaiwaka charging into the future

By Drive Electric18 November 2015No Comments

Kaiwaka is helping Electric Vehicle owners from Northland and Auckland to travel freely to and from the “Winterless North”. Jaques Foursquare in Kaiwaka is home to the first of 75 DC fast charging stations.  No strangers to transport innovation, the Jaques family have helped Kiwis get around the country with greater ease for decades, as Greg Jaques Grandfater was the responsible for putting the first petrol pump in Kaiwaka last century.

Charge Net NZ, Northpower and the Northland Regional Council worked together to install this charging station in October.  The station has been a great talking point for locals and travelers alike.

“People are stopping in and taking pictures of themselves at the station all the time.” Said Paula Jaques from Jaques’ Four Square. “It is like its own landmark now, and people are really interested and it already gets a lot of use.”

These stylish stations will charge an EV with the suitable charging socket in a fraction of the time it takes people to charge at their homes, and will help remove one of the biggest the barriers for people who are keen to own an Electric Vehicle.

“With the fast charging network rolled out, and many diverse partners and players offering charging to the public, any Kiwi family or company will be able to travel with ease around this beautiful country in an Electric Vehicle.”  Said Nick Smith, the Chief Operations Officer at Charge Net NZ.

Charge Net NZ want to collaborate with all stakeholders to speed up the process of Electric Vehicle adoption for a better New Zealand.

Some background on charging