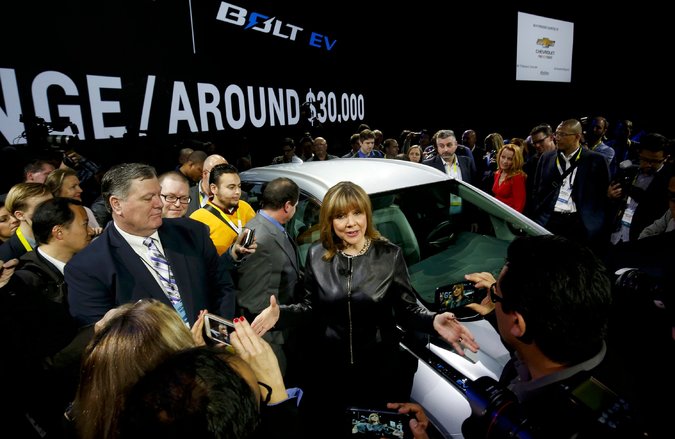 Carmakers Forge Ahead With Electric Vehicles

– via The New York Times

LAS VEGAS — Although sales of electric and hybrid vehicles have struggled, automakers are charging ahead to bring new battery-powered vehicles to market.

Several car companies have focused on electric vehicles at the International CES consumer trade show here, including General Motors, which on Wednesday introduced the production version of its Chevrolet Bolt.

G.M.’s chief executive, Mary T. Barra, said the Bolt was a big step forward in the electrification of vehicles because of its price and ability to travel 200 miles on a fully charged battery.

“This is truly the first EV that cracks the code because of long range at an affordable price,” Ms. Barra said in a keynote speech at the show.

The Bolt, which will go on sale this year, will carry a sticker price of $30,000, including government incentives that total about $7,500.

But even with its extended range and mass-market price, the Bolt may still face a difficult battle to lure consumers who are taking advantage of $2-a-gallon gasoline to buy larger vehicles.

While sales of pickups and sport utility vehicles soared in 2015, all-electric models and gas-electric hybrids languished in showrooms.

For example, sales in the United States of the all-electric Nissan Leaf fell 43 percent in 2015 compared with 2014, and the leading hybrid model, the Toyota Prius, dropped about 11 percent.

Over all, electric and hybrid vehicles accounted for about 2 percent of the American market. Still, luxury automakers like BMW introduced a new electric car last year, and Tesla is expanding its lineup to include an all-electric S.U.V., the Model X.

G.M. has had mixed success with its Volt plug-in hybrid, which marries battery power with a small gasoline engine that significantly extends its driving range.

But Mr. Barra said on Wednesday that G.M. is “committed to electrification” despite the lagging sales of current electric cars and hybrids. Others at G.M. said the new Bolt could change consumers’ perception of purely electric cars as strictly for commuting and other short trips.

“All of our research shows the buyer consideration goes up dramatically with a range of over 150 miles,” said Pam Fletcher, G.M.’s chief engineer for electric vehicles.

But industry analysts are unsure whether electric cars will catch on with consumers anytime soon.

“It will be interesting to see how the market embraces the Bolt in this era of cheap gas,” said Karl Brauer, an analyst with the auto research firm Kelley Blue Book. “But from a value and function standpoint, it sets a new benchmark.”

The Bolt is a roomy, four-door compact car that seats five people and includes features like a rear camera that streams a wide-angle view directly to the rearview mirror used by the driver.

Ms. Barra said that it also has fast-charging capability and can achieve an 80 percent charge within an hour. She added that the Bolt could prove ideal for ride-sharing in urban areas.

This week, G.M. invested $500 million in the ride-sharing service Lyft as part of its strategy to adapt to different trends in automotive transportation.

“The way people get around is changing forever, and we get that,” said Ms. Barra, who emphasized that G.M. expected to be a leader in new forms of personal mobility.

Other automakers are also showcasing electric models at International CES, including Volkswagen, which on Tuesday unveiled a concept version of an electric microbus.

The battery-powered e-Tron is expected to go into production by 2018, and is a cornerstone of Audi’s plans to move aggressively into electric cars and plug-in hybrids.

“We expect that at least 25 percent of our business in America will have a plug within 10 years,” said Scott Keogh, president of Audi of America.

The e-Tron is also becoming something of a laboratory for Audi as it ramps up its development of connected vehicles and autonomous cars.

“Electrification, connectivity and autonomous driving are the trends,” said Ricky Hudi, a senior executive at Audi in Germany.

Audi has already developed prototypes of driverless cars, but the technology required was so large it took up nearly the entire trunk space.

But Mr. Hudi said the technology was advancing so rapidly that Audi’s current prototypes use much smaller, high-speed processors.

“The brain of piloted driving has become smaller than a tablet computer,” he said.

The larger questions hovering over the industry is whether consumers are truly interested in purely electric vehicles, or cars that drive themselves.

A new study by the research firm JD Power to be released on Thursday found that consumers ranked some automation features high on their wish list in a new vehicle. The features that are most popular include blind-spot warning for drivers, adaptive cruise control and collision avoidance systems, the firm said.