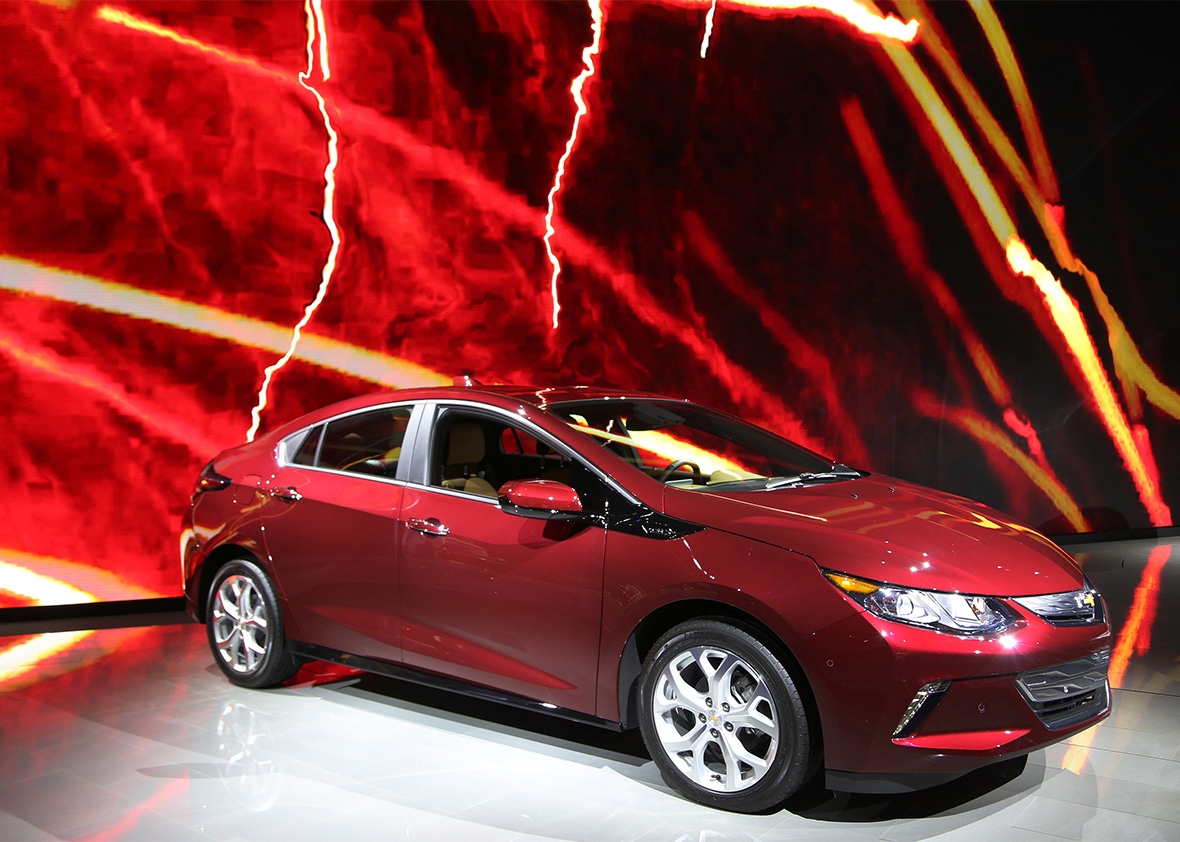 With gasoline prices falling sharply, consumers are reverting to mean behavior: They’re buying gas-guzzlers. The No. 1 seller in December was a pick-up truck, the Ford F-150, which sold 85,211 units—a 10-year high. According to Michael Sivak and Brandon Schoettle at the University of Michigan Transportation Research Institute, the average new vehicle sold in December got 24.9 miles per gallon, down 0.2 from 25.1 in November, and off 0.9 from the August 2014 peak.

Yet December was also a fantastic month for sales of vehicles that use very little gasoline or none at all. As the Hybridcars.com December 2015 sales dashboard shows, plug-in and all-electric vehicles sold a combined 13,388 units in the month—3 percent more than in December 2014.

The results are less a paradox than a new reality. The greater use of electricity in vehicle transport is a genuine, long-term underlying trend in auto manufacturing that has very little to do with month-to-month fluctuations in the price of gasoline.

To be sure, that growth and rising proliferation has something to do with gasoline’s high prices in recent years. If you use more electricity stored in batteries rather than gasoline stored in your tank, you can save some money. But the sustained growth of more efficient automobiles has much more to do with changes in regulation, in the external environment, in the competitive arena, and in the zeitgeist.

Using more electricity in transportation is ultimately about lower emissions and pollution, not lower gas bills. And around the world, the auto industry is feeling rising pressure (and receiving incentives) to produce vehicles that emit fewer pollutants. The Paris climate deal will prod individual governments to come up with emission-reduction plans. In China and India, two of the most rapidly growing and significant car markets in the world, pollution from sources including autos is so bad that the authorities routinely restrict traffic. (Electric cars can be exempted from such restrictions in China.) And there are carrots in addition to sticks. Norway, for example, offers extremely generous incentives for purchasers of electric vehicles.

Auto manufacturers may be big and bureaucratic, but they’ve come to realize that competing effectively in global markets will require them to be part of the solution, not the problem. And for the last several years, to their credit, automotive engineers have been working on efforts to electrify their vehicle fleets.

Consumer preferences are also playing a role. At the high end of the auto market, Tesla’s success—it sold 3,500 cars in the U.S. in December alone and 17,400 worldwide in the fourth quarter—is spurring other high-end luxury automakers to redouble their efforts. Nobody buys a Tesla to save money on gas. People buy them because they are status symbols, because they have a lot of acceleration, and because they’re regarded as cool. In other words, they buy them for the same reasons that many people buy BMW, Porsche, and Audi sports cars. To protect their turf and maintain their technology-forward images, foreign automakers have joined the electric fray. In December, BMW in the U.S. sold 656 of its very cool plug-in electric sports car, the i8, which costs about $140,000. Porsche is working on an all-electric sports car. Audi this week said it expects that 25 percent of its U.S. sales will be electric cars in 10 years.

Several price points lower, other automakers are competing to improve and expand their offerings. Engineers—bless them—have made serious incremental improvements in coupes and sedans that typical consumers can afford. As a result, electric and electrified vehicles are becoming significantly more functional without becoming that much more expensive. The all-electric 2015 Nissan Leaf, which had a range of 85 miles, has been replaced by the 2016 Nissan Leaf, which can go 107 miles on a single charge. The 2016 Chevrolet Volt can go 53 miles in electric-only mode, significantly higher than the 38-mile all-electric range of the 2015 version. These are leaps in efficiency of 26 percent and 39 percent for what might be deemed entry-level plug-ins. The Nissan Leaf starts at about $29,000, while the Volt’s base price is about $26,000. And there are many more to come. Hyundai this year plans to introduce the Ioniq, which is meant to take on the Prius, and will come in hybrid, plug-in electric, and all-electric options.

Alongside the incremental improvements and expanded choices, there is also the promise of quantum leaps. General Motors this week unveiled the 2017 Chevrolet Bolt, a zippy little hatchback that will have an all-electric range of up to 200 miles and could cost as little as $30,000, after incentives.

No single one of these models will have the impact of the Model T or rival the popularity of big sellers like the Ford F-150 pick-up truck or the Jeep. But cumulatively, the rapidly expanding roster of cars that rely entirely or in part on electricity will populate America’s car lots and roads and slowly gain market share in 2016—even if gasoline remains at around $2 per gallon.

Critics of these vehicles miss the point that cars aren’t simply utilitarian objects. They’re consumer products. And different people buy them for all sorts of different reasons. It’s clear that auto manufacturers believe there is a significant and growing chunk of the population that is interested in purchasing vehicles that run on 21st-century drive trains rather than 20th-century ones, that prefers to be on the leading edge of technology rather than the lagging tail. Cars today, in fact, are as much about technology as they are about mobility. The Detroit Auto Show opens next week. But General Motors chose to unveil its all-electric Bolt this week in Las Vegas—at the Consumer Electronics Show.