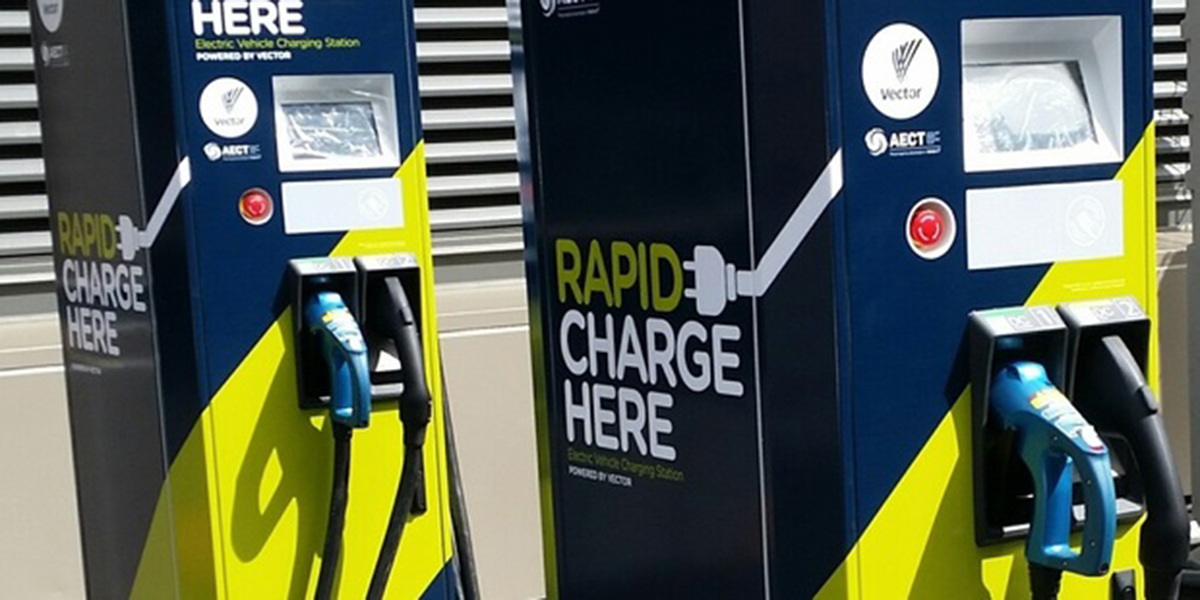 By Drive Electric2 November 2015No Comments

Electric vehicle owner John Leenman can’t wait for the first of Vector’s fast charging stations to come to Hobson St in Auckland city on November 13 – he says it is the future come to town.

“It will be my first stop when I come to Auckland,” says the 60-year-old Thames owner of a Nissan Leaf wholly electric vehicle (EV) which he regularly drives up to visit his grandchild.

First stop because the fast charger, the first of its kind in New Zealand, takes only 15 minutes to zip the car battery back up to 80 per cent capacity; it means Leenman can head back to Thames same day instead of having to stay in Auckland overnight.

“We have enough range to get from Thames to Auckland and always have something to spare when we arrive,” Leenman says. “There are about two dozen charging points round Auckland but I think Vector are doing a great thing by installing two fast chargers in Hobson St.”

Vector, the largest energy infrastructure company in New Zealand, have long been a proponent of electric vehicles and are installing a lot more than two charging stations in Auckland in the near future – a further 19 rapid chargers and up to 16 standard chargers are planned in the next eight months.

Rapid chargers replenish most EV batteries in 15 to 30 minutes, offering a level of convenience starting to approach that of filling up petrol-fuelled car at a gas station. That is a dramatic improvement on home charging (8-12 hours for a full recharge) and standard chargers (3-5 hours).

Leenman says: “It only takes 15 minutes to charge my Nissan 80 per cent on a rapid charge. The last 20 per cent takes longer – but 80 per cent is all you need, you don’t have to fill it up.”

It’s also cheaper. Not only are Vector not charging for their charging, so to speak, for at least a year but Leenman says his Nissan Leaf is saving him a lot of money. He bought it in January and has saved $2000 in petrol already.

“I reckon I will save $2500-$3000 over a full year,” he says. “What’s not to like? What other sort of car can pay itself off in about eight years? Conventional petrol and diesel models start depreciating immediately – EVs pay you back for buying them.

“Plus they are dirty and EVs are dead clean, whisper quiet, don’t assault the environment and there are only about 25 moving parts in an electric motor, compared to about 2000-odd in a conventional motor; EVs need virtually no maintenance.”

Leenman believes Volkswagen’s highly publicised difficulties with emissions on some of its diesel cars will spur more drivers into EVs. As charging stations proliferate, it could soon be as common a sight – and maybe about the same cost – as buying a cup of coffee.
Vector say their charging service will be free to begin with but may eventually cost about $6 for a rapid charge.

The new facility may also be the beginning of the end of “range anxiety” – the name given to the doubt many drivers have that an electric vehicle has enough juice in its batteries to complete its journey.

“I think that’s overblown,” says Leenman. “Once you get your head round your electric car and you know how it works, there is no problem. We charge ours off solar panels in the afternoons and it takes only a few hours.”

A widespread charging network, with a preponderance of rapid chargers such as the one we are installing at Hobson Street, will mitigate EV owner concerns.”

Ryan says range anxiety is not new: “In the early days of the internal combustion engine, people initially only drove short distances because they feared running out of fuel.”

It wasn’t until Bertha Benz, wife of Karl Benz, inventor of the modern automobile, took the Benz Motorwagen No 3 on a 104 km trip, refuelling with a solvent she acquired from a pharmacy, that people began to gain confidence a car could cover long distances.

“Bertha Benz’s fuel stop, the Stadt-Apotheke in Wiesloch south of Heidelberg, is now commemorated as the world’s first filling station.”

Vector’s standard chargers will be sited in shopping malls and parking buildings, where EV drivers typically pull up and park for an hour or more. Rapid chargers will generally be located close to higher traffic areas.

Vector says its network will grow to accommodate the rise of EVs in New Zealand. As at March this year, total battery-powered and plug-in hybrids numbered just under 600 vehicles with about 50 new registrations per month. However, according to research reviewed by Canterbury University’s Centre for Advanced Engineering (CAENZ), EVs could represent between 10-40 per cent of new vehicle sales by 2020 and as high as 80 per cent by 2040.

“Electricity supply is at the heart of our business, so we are ideally positioned to bring to life a network of charging stations in Auckland,” says Vector Chief Executive Simon Mackenzie. “The information we get from these stations, and the other standard stations we have deployed, is providing us with valuable insights into the use of the technology and how it can be deployed across Auckland.”