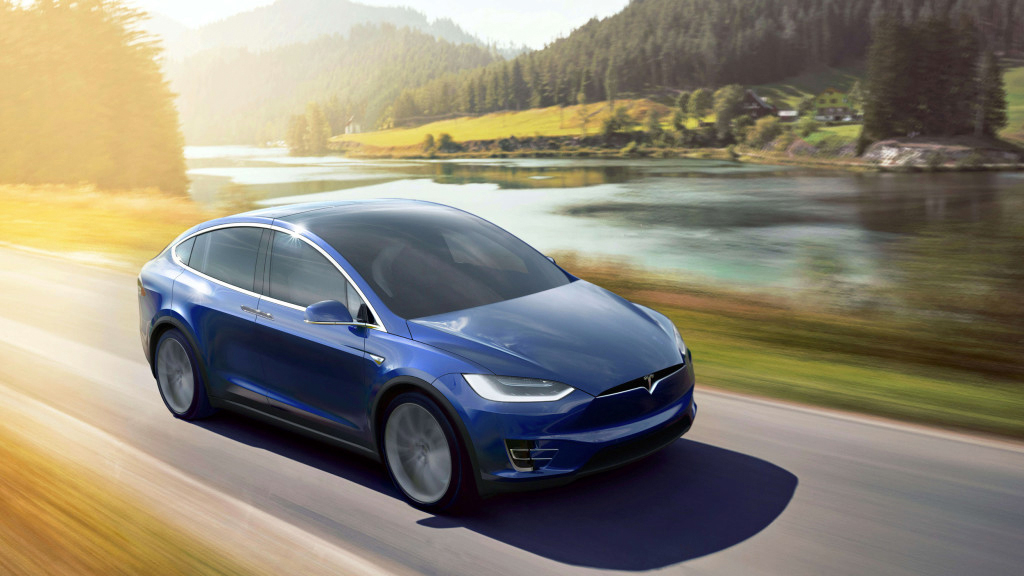 Tesla’s Model X Is Here, and It’s as Awesome as We Hoped

The world’s first luxury electric SUV is gorgeous. It’s futuristic. And once again, Tesla Motors is redefining the electric vehicle.

The Silicon Valley automaker has teased us for years with the Model X, and tonight it finally gave the world its first look at the production model, then handed six customers the keys.

Those people now own a $130,000 electric vehicle that will go 250 miles on a charge, carry seven people and haul more stuff than anyone but a hoarder might want with him. And although the X shares much of its DNA with the impressive Model S P90D sedan, in many ways it eclipses that phenomenal car. It’s not just the design, which is futuristic without being weird. It’s not just the performance, which is holy shit fast. And it’s not even the dramatic “falcon” doors that lift like the wings of a bird.

It’s how all of those features come together in a vehicle that somehow makes an SUV not just cool, but desirable.

But then, that’s what Tesla does.

“The mission of Tesla is to accelerate the advent of sustainable transport,” CEO Elon Musk said at the car’s reveal, held at the company’s factory in Fremont, California. “It’s important to know that any kind of car can go electric.”

Complications
Reaching this point has been a longer journey than Elon Musk hoped. This is the car that’s supposed to prove his company is more than a one hit wonder, and an interlude before the long-awaited Model III brings a $35,000 EV to the masses in 2017.

Musk unveiled a prototype X in 2012, saying production would begin the following year. He later pushed that to 2014, which came and went with a promise that we’d see the X this year. But then that’s Musk—he often makes big promises with short timelines, which might explain why he told us tonight that if he had it to do over again, he’d have made the X less complicated and therefore easier to engineer and build.

Be that as it may, the car is here, and first impressions suggest it was worth the wait. If you order one today, though, you’ll have to wait a while longer: Tesla estimates it’ll take 8 to 12 months to deliver cars ordered now.

Complexities
The X is, in a word, stunning. Its most amazing features are its mind-bending acceleration, gorgeous design, and amazing rear passenger doors. Tesla calls them “falcon” doors, because they lift like the wings of a bird. And because it sounds cool.

The big drawback of doors that open like wings—the Mercedes-Benz AMG SLS has them, as did the DeLorean—is they require a lot of room to open, so you’re always worried about hitting something. Tesla got around this by double-hinging the doors, and fitting each with an ultrasonic sensor and putting a third on the roof. They scan the area around the vehicle to determine how much space there is, then adjust the “span” and open accordingly.

It sounds complicated as hell, and it is, but it works beautifully. Tesla engineers say the doors can open with as little as 12 inches on each side of the vehicle—then proved it by having us park between two cars. The mirrors on the X were mere inches from those of the car on either side, yet the doors opened flawlessly. Capacitive sensors in the edges of each door sense obstacles within 2 to 4 inches, so you don’t have to worry about a descending door whacking your head or crushing your fingers.

All of this may sound like a frivolous extravagance, and in some ways it is—and you know part of the reason Musk wanted these doors was to prove he could make them—but it’s remarkably clever, even practical.

Yes, practical. The doors make it easy to get in and out of the vehicle. No gymnastic contortions to get into the (standard) third row seating. No more cantilevering yourself to get your kids into their child seats. No more playing Tetris trying to get your stuff in. Just throw open those doors—actually, push a button and let the doors lift automatically, in 6 to 7 seconds—throw in your groceries and bags and whatnot, and climb in after it.

Speaking of stuff, the X is cavernous. No one could tell us the internal volume—you’d think someone at Tesla would have had that figure—but one engineer said you could carry a sheet of plywood. Another said the X would easily swallow a surfboard. And yet another said you could carry a load of two-by-fours. Suffice it to say, this thing will swallow as much cargo as any normal person would carry. Tesla offers an accessory hitch that holds four bikes or six pairs of skis, and can be attached to the back of the car in just a few seconds.

Should you somehow manage to run out of room, the Model X has Class 3 towing capacity, which in lay terms means it’ll haul 5,000 pounds.

In other words, unless you regularly haul enough cattle to supply all the leather in this thing, space is not a problem.

Cavernous
Another clever trick is the “monopost” design of the second-row seats, which is fancy way of saying that each seat (two if you get the six-passenger model, three if you get the seven), sits on its own chrome-plated post. That makes each seat almost infinitely adjustable fore and aft and provides ample room for everyone’s feet. The designers drew inspiration from high-end office chairs and admit they were, like the doors, a bitch to engineer.

Along with the doors and the seats, Musk is especially proud of the “panoramic” windshield, which extends back over the front seat seats to provide an exceptional view. Tesla claims it is the largest windshield ever installed in a production vehicle—yet, oddly, no one had actually measured the damn thing and so couldn’t say exactly how big it is.

Whatever the number, we can tell you that if you look at the X head-on, it appears to have a glass roof, and riding up front almost like being in a convertible.

Equally impressive is the sound system which is, in a word, glorious. But then, with 560 watts and 17 speakers, how could it not be? Tesla designed the system in-house specifically for the X because it wanted to ensure the system delivered the best sound with the smallest power requirements—essential in an electric vehicle. (General Motors took a similar tack with the Chevrolet Volt, tapping Bose to design a system specifically for the car.) The sound is crisp, clear, and loud—even when standing 15 feet away from the car.

The styling is perhaps best described as a Model S on steroids. It’s a taller, obviously, and, at 5,441 pounds, about 740 pounds heavier than the S. That said, it also looks more than a little like the BMW X6 from the rear three-quarter view—but when it glides by you silently on the freeway, you’ll know it’s a Tesla.

Inside, the X is futuristic without being funky, with acres of white leather, plenty of cubbies and cupholders, and that enormous 17-inch touchscreen in the middle of the dash.

Competition
Although the X is the first electric luxury SUV, it won’t be alone for long. Bentley promises a plug-in hybrid version of its new, ultra-luxe Bentayga SUV in about a year. Rolls-Royce and Lamborghini have hinted at similar plans. Last month, Audi showed off an all-electric crossover concept that’s probably a preview of the 2019 Q6. Aston Martin wants to have one ready in two years.

No one at Tesla would say just what performance, handling, and comfort benchmarks they aimed at with the X, but they’re well aware of everyone’s plans and not terribly worried. And the fact they had a Porsche Cayenne and a BMW X5 in the parking lot for comparison suggests they’re quite confident of the Model X’s sporting capabilities.

They have every reason to be.

Let’s start with the acceleration. It’s crazy. Every Model X comes with a 90 kilowatt-hour battery and dual motors, a model known as 90D. Drop another 10 grand and you get the P90D, which is the performance model with its “ludicrous mode.” Yes, Tesla actually calls it that, and it’s fitting. If you decide to stomp on the accelerator, make damn sure you’ve got plenty of open road ahead of you, because things happen very quickly. Sixty mph comes in 3.2 seconds, which is on par with the some of the best sports cars from anyone in Italy, Germany, or Britain. We tried it. That number’s legit.

We didn’t have the room to do a quarter-mile run, but Tesla says the Model X P90D will do it in 11.7 seconds. That put its alongside cars like the BMW M5, Corvette Z06, and Porsche Panamera Turbo. Top speed is limited to 155 mph.

If you find ludicrous mode just a bit too, well, ludicrous, or you don’t want to spend that extra dough, the base model adds about half a second to the acceleration and quarter-mile times. Which is to say, it’s still bloody fast. The Model X 90D starts for $132,000 and goes 257 miles on a charge, the more acceleration-friendly P90D will cost you $142,000 and cover 250 miles.

Under the skin, the Model X is identical to the Model S. Same 90 kilowatt-hour lithium ion battery. Same drive motors (259 horsepower at the front, 503 at the rear). Same software controlling it all. And the vehicles share the same (semi) autonomous capabilities.

The two vehicles both “quick charge” at one of Tesla’s stations in 30 minutes. They are designed to be updated in tandem, so any software updates or performance upgrades will apply to both the S and the X. And they will roll down the same assembly line at Tesla’s sprawling factory in Fremont. The company plans to ramp up production, immediately, but wouldn’t say how many might be built by the end of the year.

Of all the things that, at first glance, make the X so remarkable, the most impressive thing about it is the overall impression it imparts. It’s a practical car—Musk has five young children, and clearly considers the demands of hauling them all when designing vehicles—but it’s not a minivan or station wagon that embarrasses parents and kids alike.

Tesla has made the family car cool.