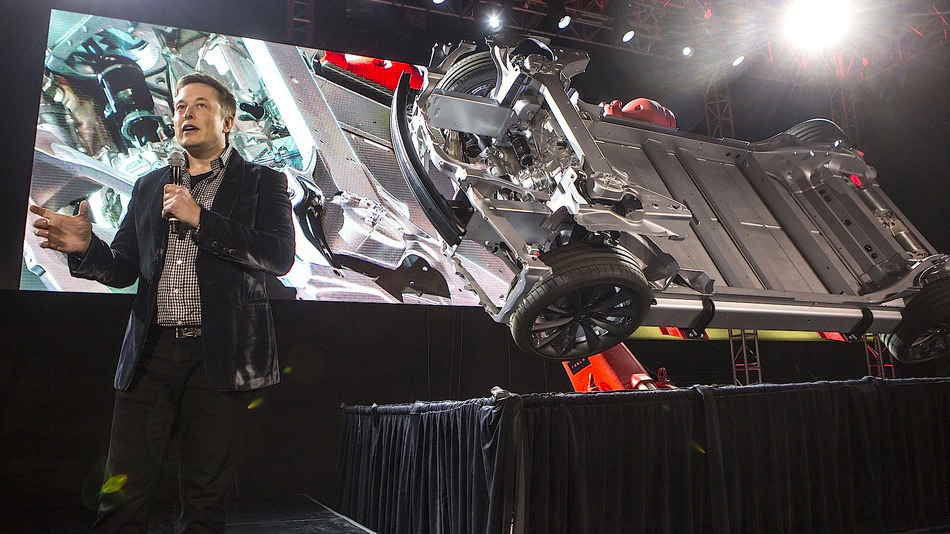 The computer-controlled driverless car is barreling down the road of the future towards us. We’ve known this for a long time, but the speed and the matter-of-factness with which it is moving from prototype to actual product still has the power to give you whiplash.

That became clear on Thursday, when Elon Musk offered a classic example of what journalists call “burying the lede.” He had called a press conference on the subject of a Tesla software update designed to eliminate “range anxiety,” or the fear that your electric car will run out of power before it reaches the next charging station on a long road trip.

After he’d dispensed with that subject, Musk dropped in a casual addendum: all Teslas will get an over-the-air update this summer, probably around June, allowing them to drive in “Autopilot” mode.

The enigmatic, soft-spoken CEO didn’t offer many details, but it seems Autopilot will be disabled when you’re not doing freeway driving, which is by far the easiest aspect of autonomous vehicle activity. Musk did confirm that the Autopilot mode would be “technically capable of driving from parking lot to parking lot.” The car will also be allowed to drive itself when you summon it, and when you’re parking it in your garage.

Meanwhile, Google is starting to open up about its driverless car project, which has already put hundreds of vehicles on roads in California and Nevada. And it’s being almost as off-handed about the whole thing as Musk.

Indeed, the head of its secretive Google X labs, Astro Teller, casually dropped in to his South by Southwest talk earlier this week an intriguing nugget: the company could have offered freeway-driving driverless cars as much as two years ago, but preferred to build a vehicle from the ground up that could handle all driving — and didn’t have so much as a steering wheel.

“We could have taken a much easier path than the one we’ve chosen,” Teller told a packed crowd in an Austin ballroom. “Two years ago we had a perfectly good freeway commute helper. Freeway driving was easy for our cars at that point. You stay in your lane, change lanes occasionally, and don’t hit the guy in front of you — there’s the occasional poor driver who makes things a little interesting, but the car had basically mastered freeways.”

And how about surface streets? We know the biggest problem is trying to figure out those unpredictable pedestrians who might step out into traffic at any moment, or do one of a hundred crazy things; we’ve long assumed that’s the sort of situation that only a human brain can handle. But according to Teller, Google X is mastering the most complex pedestrian situations, too.

It’s worth quoting Teller in full on this topic, not least because it involves an amusing anecdote about a duck.

One of our projects is focused on building a fully self-driving car. If the technology could be made so that a car could drive all the places a person can drive with greater safety than when people drive in those same places, there are over a million lives a year that could be saved worldwide. Plus there’s over $1 trillion of wasted time per year we could collectively get back if we didn’t have to pay attention while the car took us from one place to another.When we started, we couldn’t make a list of the 10,000 things we’d have to do to make a car drive itself. We knew the top 100 things, of course. But pretty good, pretty safe, most of the time isn’t good enough. We had to go out and just find a way to learn what should be on that list of 10,000 things. We had to see what all of the unusual real world situations our cars would face were. There is a real sense in which the making of that list, the gathering of that data, is fully half of what is hard about solving the self driving car problem.

A few months ago, for example, our self-driving car encountered an unusual sight in the middle of a suburban side street. It was a woman in an electric wheelchair wielding a broom and working to shoo a duck out of the middle of the road. You can see in this picture what our car could see. I’m happy to say, by the way, that while this was a surprising moment for the safety drivers in the car — and for the car itself, I imagine — the car did the right thing. It came autonomously to a stop, waited until the woman had shooed the duck off the road and left the street herself and then the car moved down the street again. That definitely wasn’t on any list of things we thought we’d have to teach a car to handle!

But now, when we produce a new version of our software, before that software ends up on our actual cars, it has to prove itself in tens of thousands of situations just like this in our simulator, but using real world data. We show the new software moments like this and say ‘and what would you do now?’ Then, if the software fails to make a good choice, we can fail in simulation rather than in the physical world. In this way, what one car learns or is challenged by in the real world can be transferred to all the other cars and to all future versions of the software we’ll make so we only have to learn each lesson once and every rider we have forever after can get the benefit from that one learning moment.

So to recap: Tesla cars will start self-driving this summer, on freeways at least. (It seems likely that once we’ve gotten used to that notion, autopilot for the full ride will be unlocked.) Google could have done the same thing for us a few years back, if the company were not driven by perfectionism and relentless iteration.

And it doesn’t end there. In the UK, self-driving prototypes will move from off-road to on-road activities this summer, thanks to a Department of Transport ruling. We’ve already seen the self-driving Audi at the Consumer Electronics Show in Las Vegas this past January; that too has been tested in California. BMW and Mercedes are also on the case, while chipmaker NVidia has dedicated its most powerful chip ever to the forthcoming slew of driverless cars.

And yes, maybe a self-driving Apple Car isn’t so far off after all.

Look at self-parking technology. That was once a pipe dream, too. Now it’s available, in some form, assisted or otherwise, on Lexus, Toyota, Volvo, the Ford Focus, Kia, Volkswagen and even the cut-price European brand, Škoda.

In other words, don’t be surprised to find yourself checking out a whole showroom full of self-driving models come 2020 (which is when we’re told the Apple Car will arrive).

And if the computer-controlled car is widely accepted as safer than humans, which Google has already proven, then the next step is obvious: your insurance premiums will rise if you don’t own one.