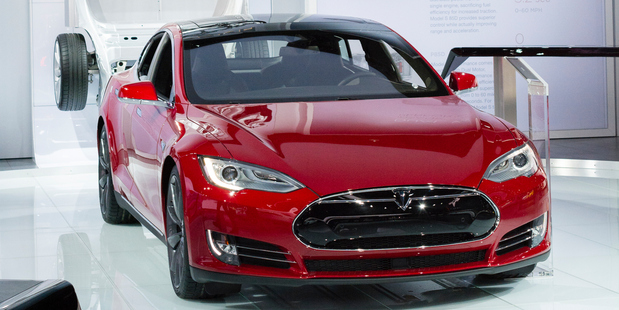 By Drive Electric12 August 2015No Comments

Tesla’s $31 billion stock value is built on a dream-that a startup might somehow be able to produce a half-million all-electric cars per year by 2020. But a steady drip of production delays and lowered sales forecasts have caused some to question whether his 500,000-car goal is still possible, if it ever was.

Last week Tesla backed off its full-year forecast for vehicles sales by about 5,000 deliveries. The 2016 forecast was also nudged down to a weekly average rate between 1,600 and 1,800-down from a previous target of 2,000. Missed deadlines are nothing new for Musk and his car company. The Model X SUV, once promised for 2014, won’t be released until this September; the mass market Model 3 is currently slated for late 2017.

The problem with placing bets on Tesla’s future is that there are very few examples to compare it to. He’s building an entirely new kind of automobile: a battery-powered car that goes zero to 60 miles per hour in just 2.8 seconds and runs for almost 300 miles on a single charge. To accomplish these goals he’s completely reimagined the manufacturing process and undertaken construction of one of the world’s biggest factories, just to supply the batteries.

When has another startup tried to do so much, so quickly? There’s really only one example, the original game changer: Ford Motor’s Model T. Here’s how the trajectories of Elon Musk and Henry Ford match up:

Of course, this isn’t the first time Musk has been compared to Henry Ford, but the parallel in the production data is striking. Tesla first surpassed 10,000 deliveries in 2013-the same milestone Ford hit in 1909. By 1916-just seven years later-the Model T hit Musk’s goal right on schedule and produced 501,462 cars. Maybe the 2020 plan isn’t out reach for Tesla.

“I do remain confident about half a million cars in 2020, and maybe being able to exceed that,” Musk said on a conference call with investors last week, after an analyst asked whether he still stood behind the forecast. “That’s five years from now. If you go five years in the past for Tesla, we were producing 600 cars per year-now we can produce 600 cars in three days. So I think going from here to 500,000 cars a year is a much smaller leap.”

Tesla is already making some of the fastest-driving cars in the world. Now all it has to do is keep up with the old Model T.