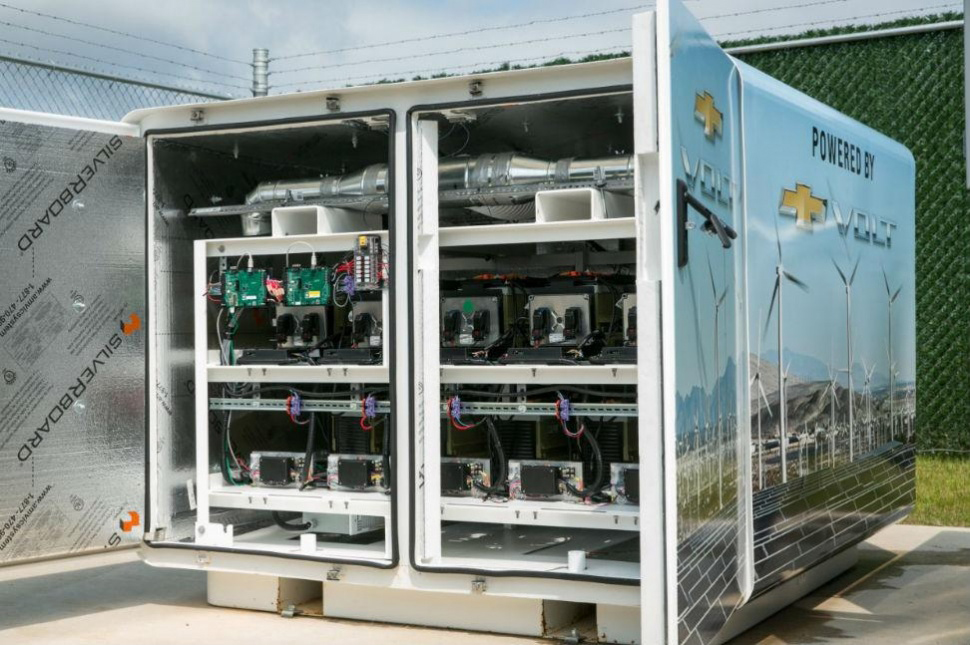 By Drive Electric22 June 2015No Comments

When an electric vehicle’s battery has seen it’s last day on the road, what happens to it? If you think General Motors just throws them out, think again. Turns out GM actually re-purposes them and uses them to power one of its data centers. In an effort to reduce energy costs, the company the old batteries with some wind and solar power and actually managed to get the data center to achieve net zero energy.

All of this is taking place at the new General Motors Enterprise Data Center at its Milford Proving Ground in Michigan. There, five old Chevrolet Volt extended-range electric car batteries are powering the lights.

You’re probably wondering; if the batteries still work, why aren’t they still being used in EVs? Well, put simply, it’s because Chevy Volts typically require a specific voltage to run, and once the battery’s output dips below a certain level, it can’t provide that voltage. That doesn’t mean the battery is completely worthless though. Although it might not be useful in an electric vehicle, according to GM, “there is a lot of leftover juice for stationary use.”

“Even after the battery has reached the end of its useful life in a Chevrolet Volt, up to 80 percent of its storage capacity remains,” said Pablo Valencia, senior manager, Battery Life Cycle Management. “This secondary use application extends its life, while delivering waste reduction and economic benefits on an industrial scale.”

The batteries also act as a back-up power source and can keep the building running for up to four hours if needed. Any extra energy can be sent back to the grid if it’s unused. Working in tandem, GM’s 74-kilowatt ground-mount solar array and the two 2-kW wind turbines actually produce enough power to supply not only the entire office building, but also its adjacent parking lot. Altogether, the renewable technologies produce about 100 megawatts of energy annually – that’s enough energy to power 12 households for an entire year!

And that’s not all. GM is trying to learn something from all of this. The company is treating the building as a sort of real-life experiment so it can figure out exactly how these batteries distribute their energy, and then determine some more commercial and non-commercial uses for them. “This system is ideal for commercial use because a business can derive full functionality from an existing battery while reducing upfront costs through this reuse,” Valencia said.