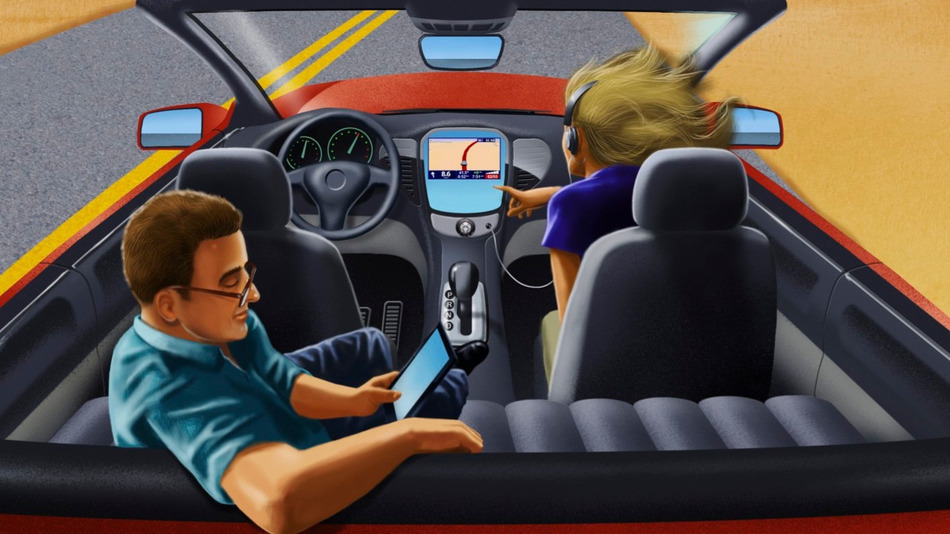 Get out of the driver’s seat, human

Here are two things we know about human beings: First, they are nowhere near as good at driving as they like to think. Second, they are very resistant to change, even when that change will prevent millions of deaths.

Compared to the rest of the world, however, America is the little old lady doing 20 miles per hour in the slow lane of death. Only about 12 people per 100,000 residents die each year in car accidents. In India, that number is 20. Thailand, Libya, the Dominican Republic and Eritrea are the “winners” — if you can call it that — of this grisly game with around 40 deaths per 100,000 people each year.

In total, human error behind the wheel (or the handlebars) accounts for 1.24 million deaths per year, or one every 25 seconds. In the time it took you to read this far in this article, another heartbeat stopped, another bundle of hopes and dreams and potential was brought to an impromptu end.

The good news is that the technology already exists to alleviate this problem. We can stop the slaughter in an incredibly civilized way that will let us get wherever we want to go with a virtual chauffeur. We won’t lose our freedom; we’ll gain new freedoms, such as the freedom to not have to worry about parking. Who cares about finding a spot when the car can do just that? We can be out in our vehicle in the evening, and every occupant of the car can drink to their heart’s content.

Paradigm shifts like this are difficult, and we shouldn’t kid ourselves that a mental leap is going to be easy. We’re going to have a really hard time letting go of the prideful part of ourselves that thinks we’re better than machines at driving. It’s just no longer true.

This is easier to accept when you take a look at the numbers. In 2012, Google announced that its fleet of driverless vehicles had already completed 300,000 miles of perfect tests, across much of the Western U.S., in all weather conditions. That was a significant number because the average human driver gets into roughly two accidents every 300,000 miles. The Google cars? Zero. Zilch. Nada.

The number of miles now driven by all car companies involved in this driverless race now exceeds 1 million. Tesla is sending autonomous cars between San Francisco and Seattle almost constantly. And how many accidents, how many fatalities, how many pedestrians have fallen victim to these rampaging robots? The number still rests at zero.

Nowhere has the cars’ ability to look out for pedestrians, and all the hazards of the road, been better illustrated than in Teller’s story about a duck being shooed across a pedestrian crossing by a woman in an electric wheelchair. The car saw everything and stopped in front of the duck without a second thought. Would a human driver have even seen it?

Unpredictable pedestrian behavior was the last frontier in driverless car tech; we thought it would take years longer to solve. Apparently it hasn’t.

One of the biggest problems Google now must overcome, according to chairman Eric Schmidt, is regulatory: Driverless cars have to stick to speed limits, because it would be illegal to program them otherwise. But practically no one on the road sticks to the speed limit, so the Google car is stuck in the slow lane. And if you thought the average driver’s ego is hard to overcome, try working with a state government to raise the speed limit for robots.

In retrospect, I’m sure future historians will find it obvious that smart computers with connected cameras would always be better drivers than humans. Think about it: We’re limited to just two tiny cameras on the front of our faces. We have to close those cameras every few seconds for a blink; longer for a sneeze. We get tired. We have limited night vision. Drinking affects our reaction times even if our blood alcohol content is below the legal limit. We make calls, which has been shown to distract us from driving even when those calls are hands-free.

Yes, some people genuinely love every minute of driving and are never bored, never distracted. But I’d be willing to bet the vast majority of us turn into fidgety messes after an hour or so at the wheel, desperate to alleviate the monotony, to sneak a look at that urgent message that just came in on our smartphones — to do anything, in short, that doesn’t involve keeping our eyes on the road.

But a smart car covers itself in unblinking cameras. It can use sonar to detect other cars and obstacles. It never gets tired or bored; its reaction time and judgment are never diminished. It can quite literally multitask. And that can save, in theory, more than 1.25 million lives around the planet every year — the rough equivalent of wiping out AIDS or tuberculosis, according to the World Health Organization.

So why is no charity devoted to removing dangerous human drivers from roads? Because we’ve spent years telling ourselves stories about malevolent artificial intelligence; we’re on guard for the rise of the evil robots. In reality, however, the danger is us.

Chances are that insurance companies, which tend to be driven more by data than emotion, will spot this first, and drive premiums up for human drivers. Long-haul trucking companies won’t be far behind, since it makes much more sense to have a system that doesn’t need to take breaks in truck stops.

When that day comes, what do you think our reaction will be? Will we measure that one accident against the roadside carnage we’ve caused over the past century? Or will we behave in an irrational manner, demanding an end to robot cars like latter-day Luddites?

For the sake of 1.25 million souls a year, let’s hope we keep our heads.