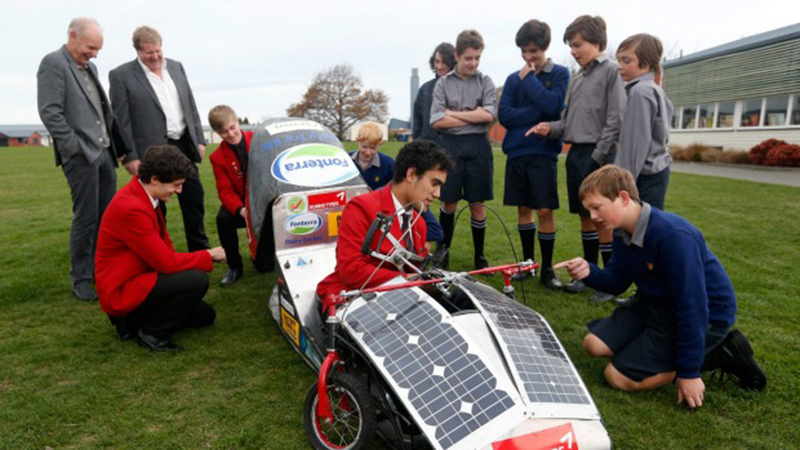 Geraldine High School students are gearing up to defend their title in EVolocity, but they might have some other local competition to contend with.

Last year a team of students from Geraldine High School came home with a swag of awards at the inaugural electric motorsport contest, EVolocity.

The boys were at Timaru Boys’ High School earlier in the week showing off their prize-winning car.

At the 2014 competition, 16 Canterbury High Schools took on the EVolocity challenge and spent the year designing and building their own electric vehicles to compete on the track in Christchurch.

“We had 16 teams in 2014 and this year we have 30-plus. The students who have taken part in the programme have really benefited from the learning that EVolocity offers. We know many of them are looking towards further study in related fields, and we are looking forward to inspiring more students as we continue to grow.”

EVolocity became a registered charity earlier this year and recently gained a grant from the Community Trust of Mid & South Canterbury, specially to encourage schools from the area to get involve, McEwen said.

As well as talking to local schools, EVolocity is on the lookout for potential volunteers and sponsors who share a passion for technology and sustainability.

“Getting behind EVolocity is a great opportunity to align your brand with youth enterprise and sustainability. We’re really looking forward to inviting schools and businesses around South Canterbury to help advance the electric vehicle revolution,” McEwen said.