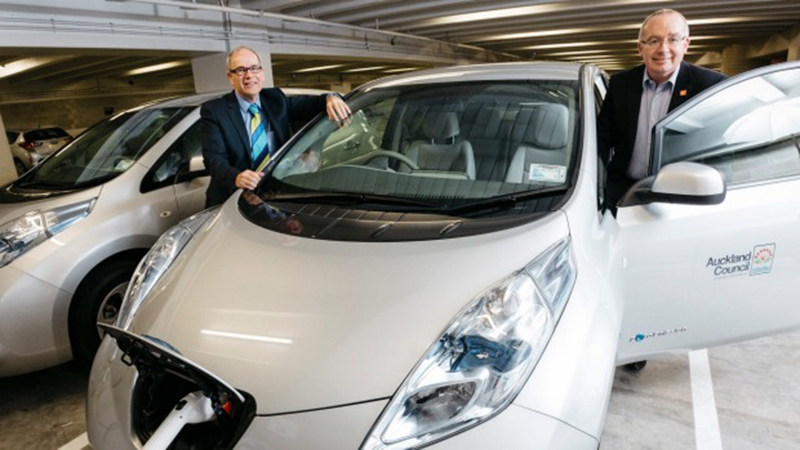 By Drive Electric16 July 2015No Comments

Auckland Council is moving to electric cars to help save on its vehicle bills and go easier on the environment.

The council has just replaced 10 of its petrol cars with two fully electric Nissan Leafs and eight Toyota Prius hybrids.

So far the more environmentally friendly vehicles are only a small proportion of its 800-strong fleet, but it’s a start, Mayor Len Brown says.

“We’ve been trying to get electric cars through the fleet procurement team for a number of years,” he said.

“To be fair the price of electric vehicles (EVs) has plummeted, it’s made it much more realistic.

“We’re now at a point where EVs have the technology and pricing and public sentiment to become a serious option.”

All going well he hoped the council would replace at least two to three petrol cars a year with EVs. Up to 40 per cent of the fleet could be electric within 20 years.

Chief sustainability officer John Mauro said people had “range anxiety” about electric cars, but the battery in a Leaf lasted for 135kms and it was unusual for a council vehicle to be driven further than that in a day.

The cost of operating an EV was now on a par with a standard car, he said.

Auckland’s move into electric vehicles comes as the city joins The Compact of Mayors, an organisation set up by former New York Mayor Michael Bloomberg.

It is described as the world’s largest co-operative effort between mayors and city officials to tackle climate change.

In March the council-controlled Auckland Transport called for expressions of interest in running a car sharing service in the city using up to 500 fully electric vehicles.

There are currently 695 electric vehicles registered in New Zealand, up from 309 this time last year and 125 in 2013.

Electricity company Mighty River Power had committed to having 70 per cent of its fleet electric by 2018, and New Zealand Post was currently conducting trials of electric delivery vehicles in five centres, she said.

Aside from the environmental benefits, Kiwis could save themselves a lot of money by going electric.

“It’s 30 cents a litre compared with petrol; you wake up to a fully charged car every morning,” she said.

“New Zealanders are in a really great position to get savvy here. The average commuter distance is is less than the maximum distance of a pure battery EV, (we have) high garage ownership, and we’ve got a reputation for being great technology adopters.”

Mark Yates, director of EV charger company JuicePoint, said most charging of electric vehicles happened at home, but there was a network of top-up charging stations around the country now.

Topping up at these stations was known as “sipping”, as it took about five hours to fully charge a vehicle on a standard charger.

However a company called Charge.Net.NZ was currently building a network of rapid chargers, which could power up a vehicle in 20 minutes.

“By the end of the year there should be a fair amount of these chargers installed,” he said.