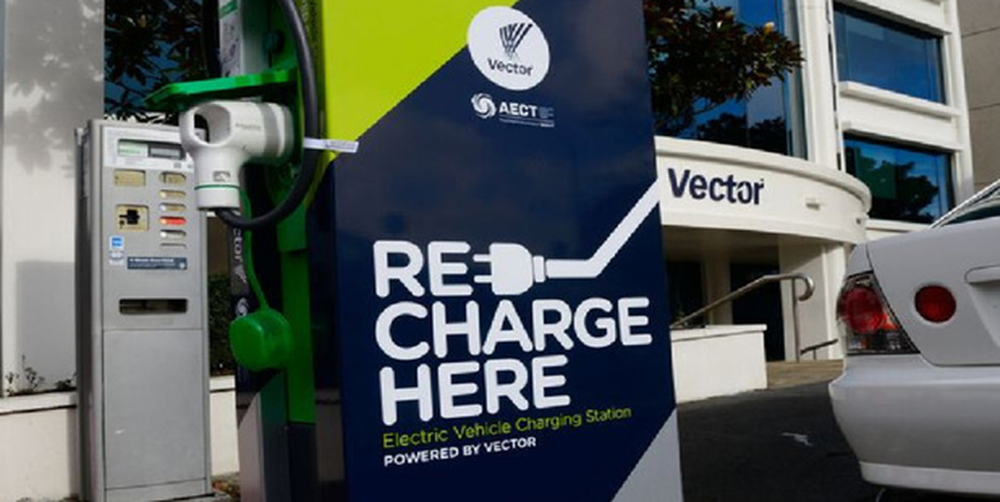 By Drive Electric19 July 2015No Comments

Take a good look at what will be a more common sight in the next year – Aucklanders charging electric vehicles at 35 Vector charging stations round the city.

Two free public electric vehicle (EV) charging stations already at the headquarters of the country’s largest energy infrastructure provider are the first glimpse of the future Vector is rolling out across Auckland.

The stations have already attracted a steady stream of EVs, including BMW’s head-turning i8 sports car – public charging points in the central city are rare and Vector has also been offering free coffee to help EV drivers pass the time during a recharge.

But the day of the charging station is nearly here – and so is the credibility of EVs not only as a viable and ecologically friendly means of transport but also with the infrastructure to support them.

The 35 charging stations will be a mixture of fast-charge plug-ins (taking about 20 minutes to charge to 80 per cent capacity) and standard chargers (which take about five hours for a full charge).

Sites are yet to be confirmed but the standard chargers will be placed where people commonly spend two hours or more – cinemas, shopping malls and the like.

It is the latest step in the evolution of EVs – helping to overcome consumer hesitation about their practicality when batteries typically give them a much smaller range than petrol-driven cars. However, networks of charging stations plus the head-turning looks of the BMW i8 ($280,000) and the Tesla (imports have been landed here for about $180,000) are helping end previous perceptions of EVs, says Vector Group Chief Executive Simon Mackenzie – as are growing business fleets of EVs, like Vector’s pool cars.

“Electricity supply is at the heart of our business, so we are ideally positioned to bring to life a network of charging stations in Auckland,” he says. “The information we get from these stations and the two stations we have installed in our staff car park to recharge our pool car EVs, are providing us with valuable insights into the use of the technology and how it can be deployed across Auckland.”

The charger in Vector’s visitor carpark and a new roadside charging point in front of the head office (the first in Auckland’s CBD) and two fast chargers at the firm’s Hobson Street substation will bring the count to four.

The significant falls in global oil prices seen over the last six months may have made the economic case for EVs less compelling in the short term. But EVs already offer lower maintenance and running costs compared to diesel and petrol cars and, as battery technology improves and EV prices continue to fall, savings will become more persuasive.

“Increasing numbers of people are also opting for EVs as an environmental choice, rather than focusing on cost alone. It’s environmentally-friendly as more than three-quarters of the country’s power comes from renewable resources. Like the solar panels we are installing across Auckland, EVs are another energy solution customers are showing us they want,” Mackenzie says.

Global EV numbers are growing exponentially – around 740,000 vehicles today, according to new research from Germany’s Centre for Solar Energy and Hydrogen Research, up from well under 50,000 in 2009. New EV sales are now reaching around 320,000 a year and rising.

In New Zealand, as at March this year, total battery-powered and plug-in hybrids numbered just under 600 vehicles with about 50 new registrations per month. However, according to research reviewed by Canterbury University’s Centre for Advanced Engineering (CAENZ), EVs could represent between 10-40 per cent of new vehicle sales by 2020 and as high as 80 per cent by 2040.

Daily commutes, particularly in cities, are relatively short. Most cars are parked off-street or in garages overnight, giving EV users easy access to power – and there are already aids like phone apps which can be programmed to start an electric car’s overnight charging to begin after 11pm or whenever cheaper, off-peak electricity clicks in.

“Ahead of expected growth in the number of EVs on New Zealand roads, Vector needs to begin planning for the infrastructure to supply these vehicles,” says Mackenzie. “These stations, whether operated by Vector or third parties are going to place additional demands on our distribution network and we need to understand how to manage that.”

CAENZ estimates EVs will not put a strain on the country’s generating capacity as total electricity demand due to vehicle charging will at most represent 8 per cent of total demand by 2039. However, CAENZ noted the adoption of EVs is likely to lead to electricity network upgrades.

“We need to understand the technology well before it is widely adopted,” says Mackenzie. “Like everything we do, we are looking to the future to understand customers’ current and future preferences so we are ready to meet their demands.”