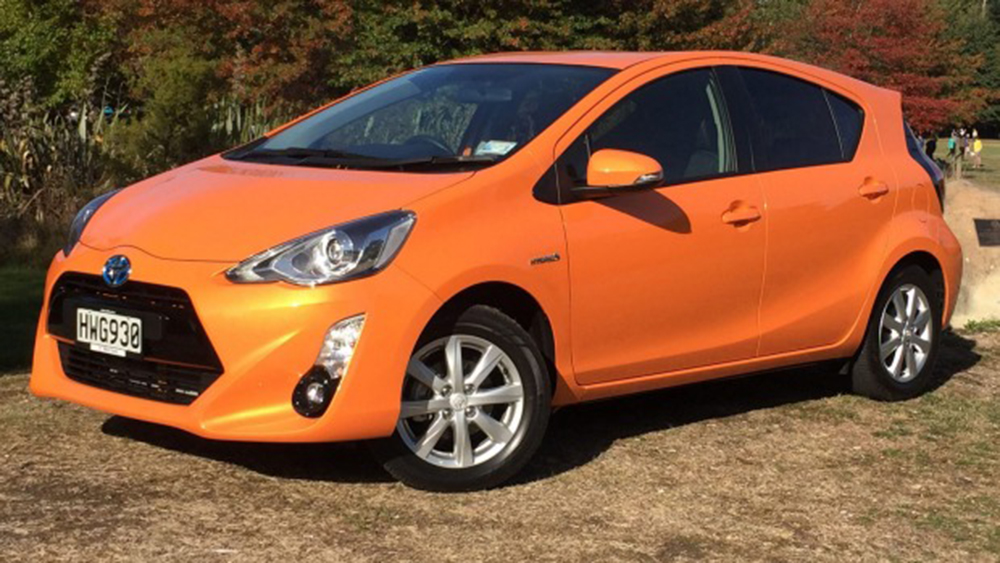 By Drive Electric7 May 2015No Comments

A colleague laughed like a drain when a Prius C was offered as a test car recently.

Toyota, to their credit, neither named nor mentioned the gender of the chuckler, but evidently the car was beneath them, it seems. Perhaps they have the luxury of being able to accept performance cars only as test vehicles. I must be doing something wrong. True, this, the least expensive hybrid on the market, is not going to tear-up the tarmacadam, but neither is it supposed to. It’s meant to be much more than that.

It’s really supposed to offer, for less than a Corolla budget and not much more than a Yaris one, a fuel-sippingly green hatchback, with decent room, ample equipment and a little slice of personality to boot.

It succeeds on most of those points and surprises in other areas.

I even sat in the back of it as we shuttled family members about, and while there’s no doubt that the best seats in the house are up front, it’s no real trial being in the back, with my knees pressing gently on the front seat back when that position is occupied by someone bigger than my 1.88m and using all available driver’s seat travel.

The interior uses some nicely textured fabrics and vinyls which while not exactly sumptuous, are comfortable and definitely not cheap to the touch. They also work well, with the dash and door furniture to make the car seem classy, well organised and thoughtful in its layout, though the double-DIN-slot sound system was atrocious in terms of its legibility. It was easy enough to set-up for the phone and radio stations, but most people we tried the car with couldn’t read the radio screen graphics unless they craned forward to do so. Mind you with voice activation, maybe I should have shouted at it.

So far so good. What about Ruby? Ruby is our luggage volume expert who sniffs out those hatch areas with sufficient width but not too much height, for easy access by canine cargo. It works there too, and even gives our four-legged mates some light from the pointy rear quarterlights.

The Prius C’s practicality has perhaps been overshadowed by its own powertrain. I was guilty myself, concentrating on the car’s hybrid set-up instead of regarding the wee Toyota as a useful hatchback that just happens to be able to travel an awfully long way on a litre of gas.

How cars like this achieve their relative frugality will soon become irrelevant, it’s the results we want, not an impossibly complicated graphic screen full of pictographic renderings of what each part of the powertrain is doing what at any particular time. We shouldn’t be distracted by such things anyway. All we want to do is plug and play, as it were, and maybe the Prius C will become a plug-in hybrid one day too, where with judicious use of home and work charging, you can avoid using petrol at all at times.

I just want to drive the car and be surprised how far it will go before my local bowser jockey has time to try his latest rude joke on me as I fill up.

While in our hands, our little orange ‘vitamin C’ as we called it could dip down to less than 3-litres per 100km on some runs while averaging 4.2L/100km, which in old money is as near as dammit to 69 miles per gallon. The factory advises that it should average around 3.9L/100km, and given the chance to use the car for a long-term experience, I’m sure it’s achievable – how about it, Toyota?

Anyway, one thing you can say about the Prius C is that does what it says on the tin.

And it’s quite a good-looking tin, too, more of a wedge than the coathanger profile used by the other, larger users of the Prius nameplate as a sort of visual shorthand for being a hybrid.

The Prius C’s silhouette is of a fairly normal hatchback type, with big light clusters high on the rear pillars and a wee vestigial upkick above the hatchglass. The three-model line-up features attractive alloy wheels in its two upper models, but even the base car’s steel rims with trims look pretty smart.

Our vitamin C colour – known as Tango, by the way – was bright, loud and unmissable, in a fluoro jacket sort of way, and we didn’t mind it a bit, though the alternatives are pretty smart too. There’s also a Zest green, and a smart Cherry flavour, but my favourite is a mid-blue, called Cool Soda. Those wishing for a tad more anonymity for their Prius C – my laughing colleague, perhaps – there’s a dark charcoal tone, a silver and metallic white, though a Balaclava would also be effective.

All packed-up for a beach run, with Ruby in the back and four adults in the cabin, one of the best tests of a small hatch’s suitability for open-road running is surely entering the on-ramp at the Belfast end of Christchurch northern motorway. This ramp has little going for it: it’s up hill, it’s often used as a quick sprint track by its users as they get up to motorway speed, and it deposits its users into the overtaking lane of the motorway, (a feature I have never seen anywhere else except New Zealand).

While our Vitamin C had to work a little hard with both electric and petrol power to reach the desired velocity on this rising route, it didn’t require full throttle and the busyness of the engine can probably be blamed on the CVT transmission as it flares while sharing out the engines’ power and torque.

Once up to cruising velocity, the Prius C is a calm, well-planted wee car, almost wafting along and riding quietly, even over expansion joints – often bumpy bugbear for little cars.

You do have to learn to ease rather than mash the throttle, as the Prius C’s mid-range, combined torque delivery of 280Nm, creates great flexibility. Four-up, we couldn’t replicate the factory quoted zero to 100kmh of 12 seconds, but with just a driver, under 11 seconds was managed against the clock.

At the other end of the performance scale another Prius C facet, is that you can run the car on electric power alone for up to two kilometres at city speeds, creeping almost silently in slow-moving traffic or into parking buildings without offending the lungs of pedestrians and cyclists, though the car’s very quietness can be a problem in itself.

But over all, the Prius C needs no defence from me – Toyota’s worldwide hybrid sales figures tell that story. That it’s priced right in the middle of the B and C segment pricing spectrum is encouraging too, starting with the base PriusC at $30,830, the PriusC with alloys at $31,830, and topping-out with the Prius C s-Tech $34,830.

It’s a little car, that’s a lot of car for the money and doesn’t use much gas. Simple and nothing to laugh at.

Connectivity: Bluetooth hands-free and MP3 and iPod compatibility as well as a six-speaker CD tuner

Not: My Orange Prius C looked like a giant vitamin pill, or a village mascot for a place big on citrus fruit, but everyone sees you, so they’re unlikely to run into you.

Verdict: More relevant than it was when new, the Prius C is the kind of hybrid you have when you don’t care if it is or it isn’t. Just a well-thought out car that uses its fuel very wisely.