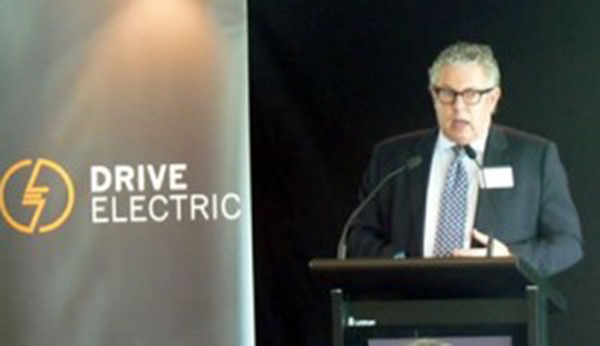 EVs: Variants will be arriving

By Drive Electric7 May 2015No Comments

The chairman of Drive Electric believes many marques are likely to have electric variants in all of the segments that they have models in the near future.

Mark Gilbert says the marketplace of the future will be petrol, diesel and electric. “Many manufacturers have said that in every sector they compete in they could have an electric variant,” he told delegates at the organisation’s plug-in fleet day at Auckland’s ASB Showgrounds on April 30.

“If you speak to manufacturers here, they would endorse that. When you put the total cost-of-ownership model together, you will find it quite convincing.

“What makes the case is how electric vehicles [EVs] are disrupting the technology system as we know it. Myths that blur the potential of these cars are being challenged.”

LOOKING AT THE BIGGER PICTURE
“Internationally, growth is occurring,” Gilbert said. “But only 500,000 EVs were sold last year – less than one per cent of global sales.

“Europe is leading the way. Norway is a country New Zealand gets compared to economically and it had 14 per cent EV penetration last year. This year, it’s already running at more than 20 per cent. At the end of March, New Zealand had 589 units on the road.

“New Zealand has 80 per cent renewable resources, but 0.1 per cent of it goes into transport. The Minister [of Transport, Simon Bridges] stated his government is interested in EVs and he’s keen to look into what the barriers to uptake are.

“We will get more coming into the marketplace, not only in the new-car sector but also in used, so there is opportunity right through for every buyer type.

“People who adopt EVs can save households about $2,000 per year. That is based on the average car in New Zealand doing 12,500km a year and $2,500 to fuel it with electricity– equating to 30 cents per litre.

“EVs are not new. Had Henry Ford not come along and had the US not fallen in love with oil, the fleet may be different. Tesla is not in New Zealand yet, but the range of a Tesla is more than 400km. A Nissan Leaf has a range of 120-150km. The average number of kilometres travelled in New Zealand is 33-35km, so you can four to five days of potential running out of one.

“As far as battery disposal from these cars is concerned, manufacturers have good sustainability policies. We don’t see this as an issue because over time energy charging and storage will become more of an issue.”

WHAT DRIVE ELECTRIC IS ALL ABOUT
A member-based organisation, Drive Electric is backed by people with experience in sustainable business practices, and from leading car companies, energy providers and government agencies.

“Put simply, we’re here to help get more EVs on the road by mainstreaming promotion and education around them, and by so doing exploit New Zealand’s renewable energy assets, which will lead to us becoming more energy efficient,” said Gilbert.

“We’re based in Auckland, but have a membership base across the country that’s diverse and has grown quite quickly. The work we’re focusing on is around plug-ins and our EVNZ stream, which will kick off later this year. The board is developing a three-year plan – a period we think will be critical in developing the uptake of electric vehicles in New Zealand.”