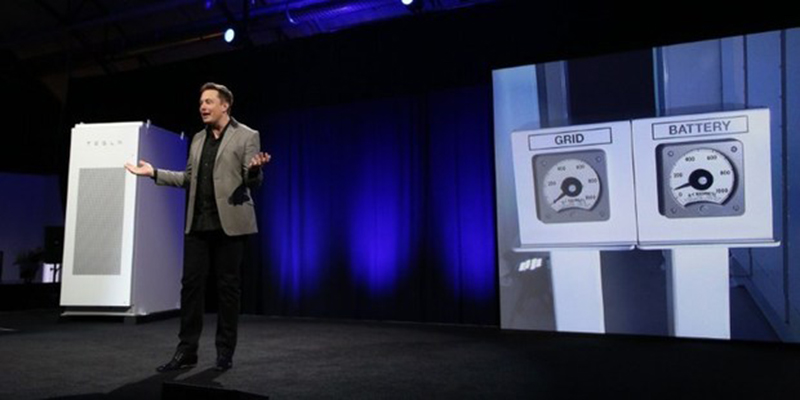 Most of the reporting has been on the Tesla Energy PowerWall 7 and 10 kilowatt-hour house batteries, but the business model, the 100 kWh PowerPacks are equally interesting. The PowerPacks are designed to supplement the mains grid for a range of businesses – Amazon Web Services has been trialling a 4.8 mWh set up for its data centres – and also to store cheap power and electricity from renewable sources.

Even more curious: Tesla Energy PowerPacks can be joined up in large numbers, providing more than 10 mWh of capacity. One United States power company is in on the that game already, to help smooth out its distribution network.

Locally, Vector which is already selling battery-backed solar has formed a partnership to bring the Tesla products to New Zealand.

It remains to be seen if Vector stops at the PowerWalls and PowerPacks, or if it takes the partnership further and helps bring in the Tesla cars, and builds a charging network to support them; Vector’s already got experience in that area, and I am hearing that other power companies are serious about electric vehicles.

Exciting times ahead, and it could indeed change the entire power industry and the way electricity infrastructure is designed and built.

At the same time, the excitement should be tempered by some pretty obvious questions around the environmental and economic benefits of house batteries.

First, battery technology is is far from optimal today. The PowerWall weighs a substantial 100 kg; no figures have been published for the more capacitous PowerPack, but it won’t be a lightweight. Transportation and installation won’t be easy for either, and will be expensive.

More energy-dense batteries that weigh less and last longer are in the works but that’s still some years off.

Tesla batteries are not cheap despite being less expensive than many equivalent alternatives today. In effect, the Tesla battery buyer is taking on a good chunk of the generation cost that was borne by power utilities before. Expect to see lots more solar plus battery packages being sold by power companies for that reason.

It could end up shifting pollution to the battery manufacturing country (read: China), while leaving customer nations with a weighty (literally) waste issue as the power storage units fade and have to be replaced every few years.

Tesla Energy batteries are game changers. The game is quite complex though, just like the Tesla batteries, and we’ll see who ends up a winner. Fingers crossed, it’ll be consumers and the environment.

Gear: the new 12-inch MacBook
If you want to create notebook envy, get the light, slim and beautifully designed new MacBook. Also, get it in gold – that’s the colour everyone fawns over.
Two grand buys a 12-inch MacBook with 256GB of storage, 8GB of RAM, and a 1.1GHz/2.4GHz turbo mode Intel dual-core Core M processor with integrated graphics, in that totally quiet, fanless gold case.

It’s a very good package, the hi-res 2,304 by 1,440 Retina screen is excellent, and the MacBook is good for most day to day computing tasks like browsing, watching video, writing, email, social media and more.

There, you can stop reading the review now. Well, almost: there are a few things to be aware of before handing over the money.

First, if you like to plug things into your notebook and use it as a desktop replacement with lots of USB and other ports, the new MacBook probably isn’t right. There’s only one port, and it’s used for everything: the USB-C port charges the MacBook, acts as a receptacle for dongles that provide video connectors, older USB ports, and more.

The dongles work fine, but the MacBook’s focused on portability so having something hanging off it feels wrong.

More controversial is the lack of MagSafe connector on the MacBook. This means if you forget the USB-C cable when it’s plugged into the MacBook, or trip over it, you could pull the notebook down with you. Apple says to go wireless, but you can’t do that all the time and besides, the MagSafe connectors are really good safety features so it’s a shame the MacBook missed out on that.

Going wireless is done through the 801.11ac Wi-Fi and Bluetooth 4.0 interfaces; if you do need to use wired USB on the MacBook, it supports the new 3.1 standard at up to 5 gigabits/second speeds.

Being 13.1mm slim and light at 920 gram, it’s quite a feat of engineering that Apple managed to squeeze in a tiered 39.7 Watt-hour battery in the MacBook. Apple promises 9-10 hours battery life, but I got a bit less than that at 8 hours most days.

Once you’re used to the reduced key travel (again, a consequence of the slimness), the keyboard is nice to type on. The Force Touch trackpad with its haptic buzzes that mimic clicks – it doesn’t actually have any moving parts – can be a bit sensitive to start with but after a while, it feels like a normal unit.

Force Touch is pretty amazing technology and it adds new features to the trackpad such as long presses to reveal more information – or anything else developers would like to add to their apps.

Myself, I would sacrifice some of the light weight and slimness for just a few more connectors and a bit more battery life (think MacBook Air with Retina screen and gold case).

The MacBook is a great little device though, with its focus on portability and technical innovation. And yes, it looks very good. Especially in gold.