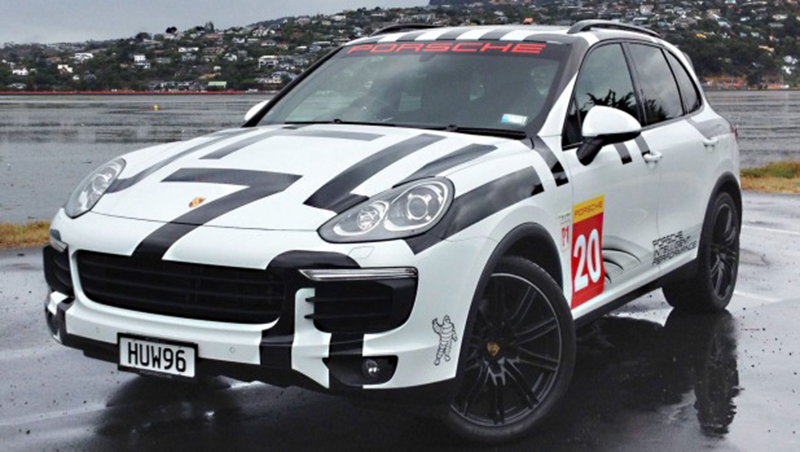 The concept of a hybrid Porsche is well established now, even on the racetrack where prototype race cars and the marque’s 918 coupes and convertibles demonstrate how useful electric power is in terms of adding to performance, as well as saving the planet.

In time, Porsche will add petrol-electric plug-in versions of its stock-in-trade 911, Boxster, and Cayman sports cars, so that, just like other German carmakers, it will have plug-in hybrid versions of every model it makes.

However, at the moment, the plug-in Cayenne S E-Hybrid SUV and the equally large Panamera S E-Hybrid luxury sedan make the most sense, with useful extended electric-only range and having big enough stickers to mostly absorb the extra cost of the E-Hybrid bits.

The previous Cayenne hybrid wasn’t a plug-in, so it was dependent on its petrol V6 power unit and re-directed braking and deceleration energy in order to keep the batteries charged. Now, you can plug-in your Cayenne at home and at work, and if your each-way commute is less than about 35km, and you use it for nothing else, you’ll find yourself forgetting the local pump-jockey’s first name, because you may not see him very often.

However, as well as the battery’s 10.8kWh potential, there’s the little matter of the other half of the 4×4’s powertrain equation, a super-flexible supercharged 24 valve 3.0-litre V6, which harbours 245kW and 440Nm on its own, meaning there’s 306kW and 590Nm when the electric power is helping out. When the V6 conspires with its electric other half, which will occur when you mash your right foot and the throttle pedal into the carpet – and you surely, will, this is a Porsche after all – the Cayenne will whisk very quietly up to 100kmh in well under 6 seconds (we managed 5.5 seconds).

That’s pretty good going when you understand that the weight penalty for going hybrid – what with batteries, extra cooling ducts and fans, and other electrical componentry takes the Cayenne S E-Hybrid up to 2240kg unladen, which is more than 250kg up on a non-hybrid model. It’s still way lighter than previous pre-facelift V8 Cayennes however.

Driving the model in typical Porsche fashion (you’ll find it hard not to) will, of course, cut a big hole in its normal economy ratings, but even if you make a habit of engaging the V6 in that

way, the Cayenne will manage family sedan-ish figures of around 7L/100km, which is way better than the old non-plug-in Cayenne hybrid ever managed – according to our notes.

Driven with low fuel consumption in mind, but still using the V6 engine as you will for longer journeys, the Cayenne S E-Hybrid can get about 3.5L/100km (about 82mpg in old money) and a frankly ridiculous 80g/km CO2 emissions rating according to the factory. I’ll have to take their word for that, for I seldom managed better than 4.3L/100km on short readouts, albeit with less practice and much lower economy driving skills than the factory drivers would have.

However, on my own drive to work, the Cayenne was never able to exceed about 60kmh, only took 20 minutes each way and the needle didn’t even move. Instead of offering a smaller fuel tank as many hybrid makers do – thinking that owners won’t need it – Porsche furnishes its Cayenne S E-Hybrid with a 100-litre item, which means that on a long journey you could easily travel 1300km without too much effort.

You can choose from several drive modes with the S E-hybrid Cayenne. Electric-only is selected by way of E-Power, while selecting Hybrid means both drive sources conspire to work together. Sport mode combines both power sources to their maximum potential, while a short-cut is to jump onto that throttle and watch the fuel-economy readout blurring into action (and yes it is possible to feel guilt!)

Then there’s E-Charge, where surplus power is harvested to feed the battery and it’s probably the way most owners will drive, most of the time.

As with most hybrids, the Cayenne operates silently from start-up and it will continue to do so, with more than enough performance on tap in traffic right up to a maximum of 130kmh. So coping with our own open-road limit of 100kmh on that commute is easy-peasy and if you’ve planned your plugging-in properly, you won’t be troubling the aforesaid petrol station attendant any time soon.

When you get used to open-road driving with this most frugal of Cayennes, you’ll start to notice a distinct detent in the throttle action, beyond which, as you perhaps overtake someone or start into hill-country, brings the petrol power-unit into play. It’s then you realise how pleasant the silent progress was, even though the engine is as smooth and sweet as it is in its donor car, Audi’s S4. While it’s measurably slower than the V8 Cayenne models, the S E-hybrid Cayenne’s performance never disappoints and what little noticeable day to day performance is sacrificed, it’s more than compensated for by its easy-going fuel consumption and green credentials.

My test car was finished in racing livery, which may seem inappropriate for a hybrid car, until it’s realised that it’s a road-going take on the paint job used by the works Porsche 919 Hybrid cars at Le Mans in 2014.

Webber’s car got to within a minute of eventual winner, an Audi, at Le Mans with just over an hour to go.

The Cayenne S E-Hybrid is no Le Mans car, though it is nimble enough. The extra weight means it does have slightly more low-speed, tight-corner understeer than the GTS model, but things start to equalise as corners open out and speed increases. As the car spends a lot of time without the engine running, the hybrid eschews the Cayenne range’s usual steering for a pure electric set-up.

Thus its “feel” and responses are a tad numb by comparison, despite being better than just about every other company’s luxury SUV.

It didn’t and wouldn’t worry this driver at all.

Another part of the standard Cayenne specification that the E-Hybrid leaves out is the PDK twin-clutch transmission, using instead an eight-speed automatic, albeit with paddle-shift.

Overall, this is a very impressive car, but with the almost as frugal if not quite as potentially clean Porsche Cayenne diesel asking about $7000 less, it could be said that its strongest competitor is in the same showroom.

However, after living with the car’s imperiously silent and squeaky clean demeanour for a few days, if you’re on a budget of $180,000 the incremental difference is unlikely to trouble a Porsche aspirant.

I’d make sure mine didn’t have the silly paint job though.

Not: Not that quick for a modern Porsche; handling suffers a tad; spare takes interior bootspace.