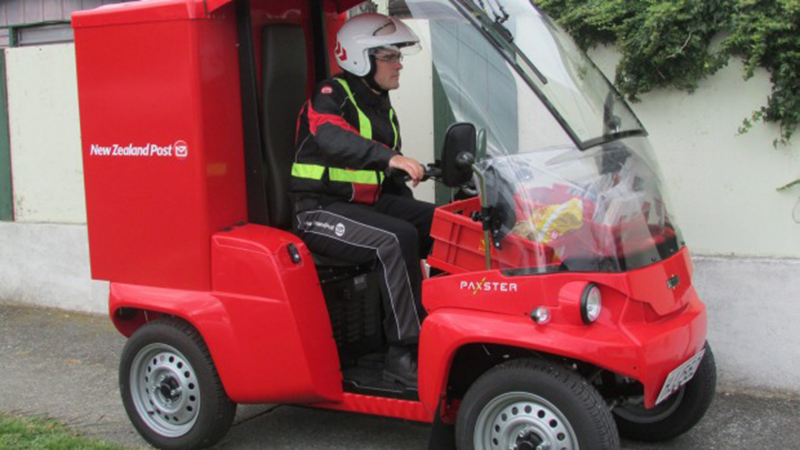 New Zealand Post is keeping quiet about when its electric delivery vehicles could be introduced into Christchurch, saying it does not want to create uncertainty for its workforce.

The company fronted up to a meeting of the Christchurch City Council’s infrastructure, transport and environment committee on Thursday to ask for permission to operate two types of electric vehicles on the city’s footpaths.

The vehicles – a three-wheeled motorcycle with a trailer and a four-wheeled vehicle similar to a mobility scooter – have already been trialled in Auckland City and Hutt City and are about to undergo a full-scale commercial trial in New Plymouth.

New Zealand Post’s Tom Croskery told the committee the company was still deciding whether to roll-out the vehicles – which cost between $15,000 and $20,000 each – ationwide, but it was speaking to all the main cities to get their support in principle.

Croskery would not be drawn on how soon the delivery vehicles could be introduced into Christchurch, citing the uncertainty it would create for New Zealand Post’s workforce.

New Zealand Post is looking to switch to new delivery vehicles because of the growing volume of parcels its posties are having to deliver.

Traditionally, letters have made up the bulk of deliveries but domestic letter volumes dropped 7 per cent to 642 million pieces last year and are forecast to drop below an annual 500 million in the next three years as consumers switch to the internet, email and social media for everything from paying bills to sending birthday greetings and keeping in touch with loved ones.

Croskery said they wanted posties to do more parcel deliveries but on bikes they could only carry around 20 kilos, which was why alternative delivery vehicles were being looked at.

“We just need to be able to carry more stuff and heavier items,” Croskery said.

The vehicles would also be able to cover more ground than posties on bikes.

“A postie on a bike does an average distance on a day of 25km. We expect a bit more out of the vehicles – about 40km.”

Christchurch City Council road corridor operations manager Paul Burden said initially council staff were very apprehensive about having New Zealand Post’s electric vehicles using the footpaths because of the potential maintenance and safety issues, but they had been won over after seeing the vehicles in action.

“We are quite comfortable with adopting agreement in principle so New Zealand Post can go on and continue with their development,” Burden said.

The committee voted unanimously to recommend the council support New Zealand Post’s use of the new electric vehicles.