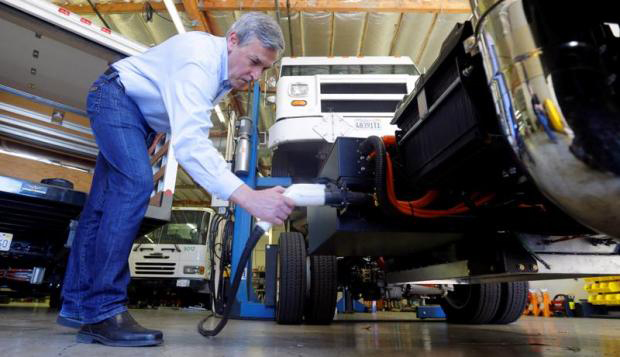 By Drive Electric4 June 2015No Comments

A Kiwi who helped found the Tesla motor group is now leading a rapidly-expanding company which converts diesel trucks into electric hybrids.

Ian Wright and some fellow engineers launched Tesla Motors twelve years ago which helped jumpstart the market for electric cars.

His latest venture, Wrightspeed, doesn’t make the whole truck, but rather sells electric powertrains that can be installed on medium-and heavy-duty commercial vehicles, making them cleaner, quieter and more energy-efficient.

“We save a lot on fuel. We save a lot on maintenance, and we make the emissions compliance much easier,” said Mr Wright, a New Zealand-born engineer who left Tesla when it was still a small startup in 2005.

Wrightspeed is one of a growing number of companies that are trying to transform the market for commercial trucks that consume billions of litres of fuel while spewing tons of carbon dioxide, nitrogen oxide and other pollutants.

While some consumers are switching to electric cars like the Nissan Leaf, Toyota Prius or Tesla Model S, convincing commercial fleet owners to replace their diesel trucks won’t be easy.

Mr Wright’s company’s plug-in powertrains feature an electric engine, battery system and on-board power generator that runs on diesel or natural gas and recharges the battery when it gets low.

To meet growing demand, Wrightspeed is preparing to move into a former aircraft hangar at the decommissioned US Naval Air Station in Alameda and the company plans to expand its workforce from roughly 25 to 250 employees over the next three years.