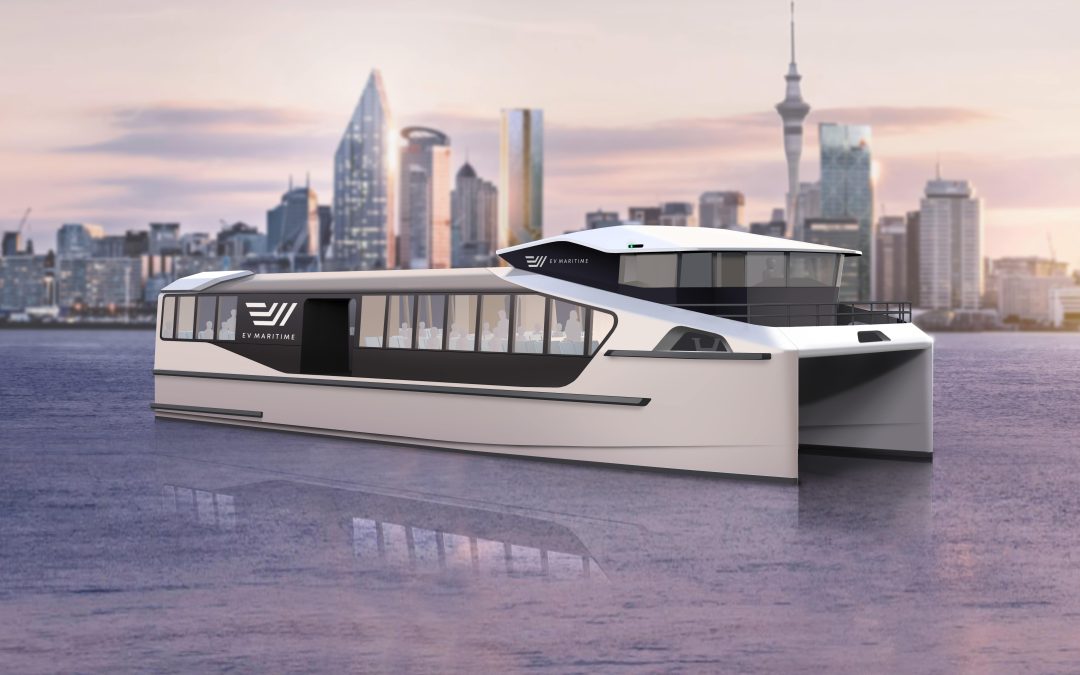 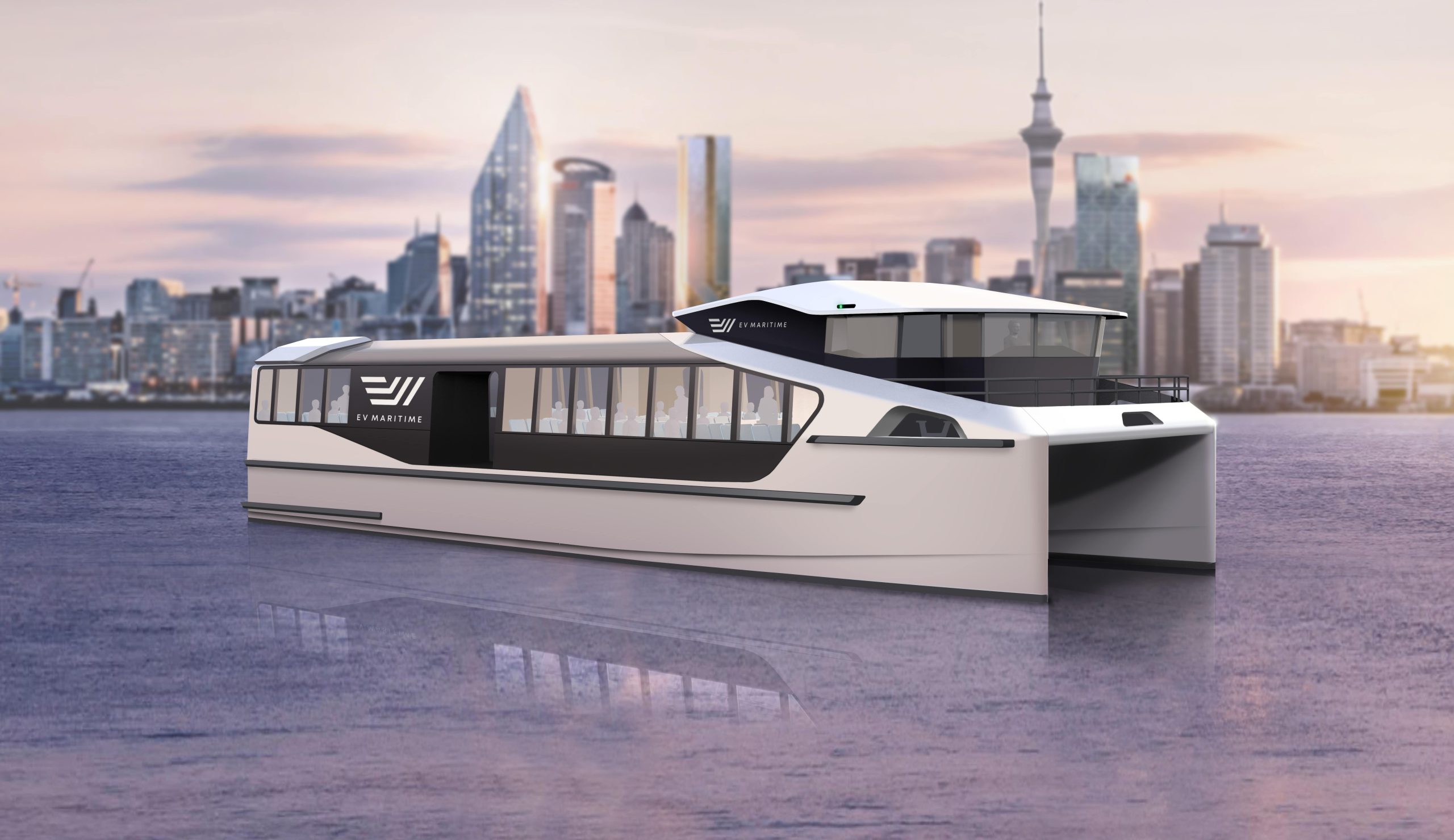 Introducing one of our most innovative Drive Electric members: EV Maritime! This Auckland-based marine technology company develops electric and alternative energy commercial boats and ferries, in an effort to help decarbonise the harbour cities of the world.

Here, we speak with Michael Eaglen, co-founder and CEO of EV Maritime, to get his insights into the future of maritime mobility.

Tell us a bit about EV Maritime. When did you start, and why?

The EV Maritime story started as a research and development project within Auckland shipyard McMullen & Wing, of which I was CEO at the time. Starting in mid-2017, we were looking to understand the potential for electric vessels for the NZ commercial market. We identified that not only was an electric future achievable for the inshore maritime sector, but also by focusing on high performance electric vessels New Zealand had something unique to bring to the world. So, together with the owners of McMullen & Wing, I founded EV Maritime in late 2018.

How have you seen the e-mobility industry as a whole evolve since EV Maritime has been in business?

Obviously the last five years have seen huge strides in e-mobility across the wider transport sector, to the extent that electric cars and bikes are now firmly established in the mainstream. The marine sector has been busy too, initially with hybridisation and more recently full electrification and hydrogen power. What started in Scandinavia has become a global movement and we are seeing electric vessel projects underway in virtually every continent.

Mostly these projects have started with ferries and this is for two reasons: firstly, ferries tend to come and go from the same locations on a repetitive basis and they stop for a period of time on location to load and unload passengers. This provides opportunities to recharge, making it much easier for operators to manage within the range constraints of electric vessels. Secondly, ferries tend to be very busy boats with high energy and operating costs. The cost reductions electrification can offer can be enough to directly fund the higher cost of electric vessels, which might be more difficult to manage on vessels with lower utilisation.

What would the future of maritime transport in New Zealand ideally look like to you?

I think we currently have two important things happening in parallel. The first is that we have a general expansion of public transport as we move ourselves away from private vehicles and into public and active transport modes. This means we will have more ferries in more places.

The second is that electrification is taking off and we will soon see it become the default choice for our maritime sector. This will start with our ferries, then tugs and pilot boats, then crew transfer vessels and general workboats. There are several projects happening in New Zealand already, across multiple builders, ranging from the Wellington ferry which will has just entered service to a hybrid electric ferry announced recently by Fullers to be built in Whanganui and our own two-boat battery electric high-speed ferry project which is about to get underway at McMullen & Wing. There’s also an electric tug on its way to Ports of Auckland and various small recreational projects also. Meanwhile we have Emirates Team New Zealand developing a hydrogen chaseboat for their next America’s Cup defence which will be a key step in establishing hydrogen as an option for zero emission operation of faster, longer-range boats.

I think that these first projects will completely change attitudes at government, business and public levels, to the extent that zero emission vessels will become the new normal very quickly. For ferries in urban public transport, dock-charged battery electric will prove to be the default technology for all new vessels entering the fleet.

Hydrogen will come along over the next 3-4 years as the zero-emission solution to the longer-range operations, with uptake strengthened as supply becomes more cost effective with scale in the wider hydrogen economy.

Even now, operators with older diesel boats are exploring electrification actively as they look to retire their old vessels and transition to electric. Operators with newer diesel boats will be feeling much less comfortable about stranded asset risk because they know that their social license to operate diesel boats will expire before the boats themselves do.  Many will be retrofitted to electric or hybrid, whilst those which are less suited to retrofit will probably find a transitional home in activities which, for reasons of range or location, are harder to electrify in the short term.

What do you think needs to happen to make maritime e-mobility more feasible in New Zealand?

When the boats are busy enough, the economics are already attractive enough to make e-mobility feasible. Ferries are a classic case for this because they are very busy boats which use a large amount of energy, which means that e-mobility makes good financial sense for them already: the lower operating costs justify the higher initial capital costs.  In these cases, the key to unlocking adoption is to ensure operators have sufficient length of tenure on their service contracts to give them confidence in the cash flows for this.

However the move to e-mobility brings significant technical, operational and financial changes for the supply industry, vessel operators and public transport agencies. The early pilot projects will be really valuable in building confidence in alternative energy across all maritime transport sectors, and the willingness of central and local governments to invest in these projects will hopefully prove to have been a major accelerator of the change.

Some will argue that if the vessels make financial sense then the market will transition by itself. However, we as humans can be short-sighted, and habitually struggle to choose to invest more now for future operational savings, even when we know it’s the right thing for our business. For this reason I do think there needs to be legislation to phase-out diesel, but we need to design that in a way which focuses efforts, investments and resources on the areas which matter most. In this I think the focus will be twofold: firstly on demonstrating leadership and secondly on measurable climate action.

On the leadership front, I expect this will start first on banning use of fossil fuels in our vulnerable or heritage areas such as Fiordland National Park, the Southern Lakes and some parts of the Hauraki Gulf. There is already pressure to do this and I am sure everyone knows it’s coming.  On the measurable climate action front, it’s all about driving the emissions reductions in the most effective way. Vessels which are doing three or four thousand working hours per year, as many ferries do, should be the first focus, whereas recreational boats, which do a couple of hundred engine hours per year, may not only bring limited benefit, they may actually struggle to justify the sustainability impact of making the transition to electric at all.

The most effective approach may be to move to permits for the use of diesel on a permission-only basis and subject to a heavy compliance and surcharge regime designed to incentivise transition, probably supported by a shrinking cap exemption on annual engine hours.

Do you have any exciting company developments coming up that you could tell us a bit about?

At EV Maritime we have been focused for the last couple of years on developing a standardised high-speed passenger ferry suitable for Auckland’s commuter network and more broadly for the harbour cities of the world. We expect very soon to get underway with construction of the first two boats, which would be in service in late 2023. We also have a couple of other designs in the wings, which we’re keeping under wraps for now!